The giraffe’s species name, camelopardalis (camelopard), is derived from its early Roman name where it was thought of as a composite creature, described as having characteristics of both a camel and a leopard. The word Giraffe is from Arabic dialectal zirafa, probably of African origin.

“To the Romans, the giraffe was camelopardalis (camel marked like a leopard). The word giraffe comes from the Arabic zarafa. As a verb it means to jump or to hurry, leading to the noun one who walks swiftly. It has also been traced to an Ethiopian word that denotes graceful one. But its primary derivation, in the opinion of linguistic authority, stems from a source meaning assemblage, as in assemblage of animals. The Greeks were more specific: they contributed its scientific name, camelopardalis (or the more common, camelopard), which literally describes a camel’s body wearing a leopard’s coat”. [Tall Blondes, Lynn Sherr, p.16.]

“The Egyptians used a hieroglyph in the shape of a giraffe to indicate ‘to prophecy’, ‘to foretell’, which has been taken as evidence of its keen eyesight. Ancient Arabic words include saraphah, gyrapha, gyraffa, and zirafa. The Persians called it ushturgao (“camel-cow”). To the Chaldeans it was deba, and ana, which may be related to nabun, used by Pliny. The encyclopedist Vincent de Beauvais, in his Speculum Naturale (1225), described it under three different names (anabulla, camelopardo, and orasius), apparently without realizing it. Albertus Magnus repeated the mistake in his thirteenth-century De Animalibus, using anabula, camelopardulus, and oraflus. Anabula probably comes from the Ethiopians, who called it nabin; and orafle was used in Old French. In Afrikaans it is called kameelperd. and in Zulu indlulamethi. But my personal favorite is the Swahili word twiga—which sounds the way a giraffe looks. [Tall Blondes, Lynn Sherr, p.19.]

In 1827 the first giraffe ever seen in France, became an instant celebrity in Paris Michael Allin in Zarafa chronicles her impact on the French:

Zarafamania gripped Paris and crowds rioted around her as she was paraded through the city and presented to the king. Women imitated her with their hair styles high, a la Girafe, and the men wore fashionably giraffique hats and ties. In the magazine of the day there were instructions for tying a gentleman’s cravat a la Girafe.”

In view of this animal’s associations with gravity, and the phonetic similarity of the words ‘gravity‘ and ‘giraffe‘, I will assume the word gravity belongs here. If the is dropped from the word giraffe it becomes graffe, the can be pronounced ; girafe becomes grief, grieve or grave; words related to gravity. People could not understand how the giraffe, ‘nature’s skyscraper’, could lower its head to drink without the high pressure (bar is a unit of pressure) of the blood gushing to its head and making the animal dizzy or faint when it raised its neck back up again. They thought it defied the law of gravity, until they discovered the rete mirabile, or ‘marvelous net’, the giraffe’s adaptations to gravity; jugular blood vessels in its neck have a series of one-way check valves that hold back the blood from flowing to the brain when it lowers its head. The rete mirabile is common to all animals but is much more robust in giraffes. “Equally marvelous is the fact the blood does not pool in the legs, and a giraffe does not bleed profusely if cut on the leg. The secret lies in an extremely tough skin and an inner fascia that prevents blood pooling. This skin combination has been studied extensively by NASA scientists in their development of gravity-suits for astronauts” []. A giraffe has an enormous heart, one of the largest heart in the animal kingdom. The heart must work against gravity to pump blood up to the head when it is erect. Baroreceptors in the atrial walls of the heart trigger reflex mechanisms that dilate or constrict the blood vessels to permit the heart to adjust to changes in blood pressure.

The name of this constellation Camelo-pardalis, from Greek pardos; has been borrowed from Hebrew barodh, ‘spotted’ (said of an animal). The Hebrew word barodh is similar in appearance to the Greek word baros from which the word gravity derives

Isidore sees the word Britain as a cognate of Latin brutus, heavy, which is from the root *gwere. ‘Briton’ is derived from Brutus (according to Geoffrey of Monmouth) “Initially expanding a Welsh legend that traces Briton origins to the wanderings of Brutus and his band of Trojans” []. A giraffe can kill a lion with a brutal kick.

The word grave, from Latin gravis, Greek baros, ‘weight’, barus, ‘heavy’, is also cognate with Greek brithein, ‘to be laden with’, brithus, ‘heavy’. The brit– of Britomartis (brit + mars) resembles brithein. Britomartis invented nets. Giraffes have a rete mirabile, or ‘marvellous net’, the giraffe’s adaptations to gravity. All giraffes have a reticulated or netted pattern on their coats giving the appearance of geometric patches on a cream or white background or of having a cream colored net thrown over them. There is the reticulated (from rete ‘net’) variety of giraffe with a more pronounced ‘net’. Britomartis, Bryte, a daughter of Ares (maybe accounting for the –martis, Mars, in her name), threw herself into the sea where her body was recovered in a fisherman’s net. Afterwards she was accorded divine honors under the name of Diana Dictynna (Artemis of the net). (Reticulum is another constellation near the South Pole and means ‘the net’, this constellation, Camelopardalis, is near the North Pole).

“Atlas, soon doomed to bow his neck beneath the pole” – Ovid, Book VMetamorphoses [].

The nape of the neck of the Giraffe of this constellation, Camelopardalis, is very close to the Pole-star, Polaris, at the North Pole (in the Urania’s Mirror picture above the star, Polaris, is named Alruccababh, the Polar Star). Atlas owned the Garden of Hesperides and in this garden he had the responsibility of holding up the heavens, and there the dragon (Draco) named Ladon guards the tree from which the Golden Apples grow (Newton discovered gravity from seeing an apple fall from a tree, it was Atlas who went and picked the apples for Hercules). The tree is also the Pole, Polaris or Ursa Minor which is enclosed on three sides by the coils of Draco. Atlas is said to have reigned in Arcadia. The adjacent constellation, Ursa Minor, is identified with Arcas the eponym of Arcadia. 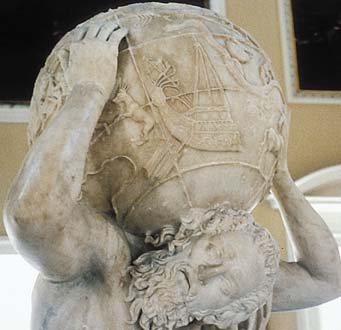 The FarneseAtlas, sculpted in late Roman times, is the first known depiction of the classical constellations –Sky and Telescope

Atlas (from Indo-European *tele ‘To lift, support, weigh’) is a book of maps, atlas is also the name for the top cervical vertebra of the neck, which supports the skull. It is named for the Atlas of mythology, because it supports the globe of the head.

The giraffe has dark distinctive geometric or geographic net patterns, irregular thin white lines separating dark patches. Those who know giraffes can identify the region of Africa a giraffe comes from by these markings. I suggest that the reticulated patterns on the giraffe’s resembles a map of Britain with the shires outlined. I suggest that these markings or outlines on the back of the giraffe might also be compared to constellations borders. The globe that the sculpture of Atlas holds is marked with constellations (not countries).

Giraffe and sheriff is basically the same word in Swedish gerefa The German term ‘Graf‘ entered English as ‘Reeve‘. Reeve is from from Old English gerefa. The word sheriff, from Old English scirgerefa, is a compound of scir, ‘shire’, and gerefa, ‘a reeve, a chief official of a shire. The term ‘Reeve of the Shire’, scirgerefa, was later shortened to ‘Sheriff’, and followed the movement to the New World. Reeve has one known relative: grieve, a noun meaning ‘sheriff‘ from geréfa [] [the verb ‘to grieve‘, grief, is from *gwere above]. The reeve had authority to raise the ‘hue and cry’ to warn people that a crime such as robbery, theft, assault, or murder was committed, or that a criminal was in their midst. A giraffe performs a similar function in the Savannas. A giraffe, the tallest animal, ‘oversees’ a local vicinity on the African plains or Savannah. Home ranges are about 46 sq. miles [perhaps comparable in size to shires?] “Giraffes can see miles away, communicating with distant friends” []. Other animals on the savanna (such as zebras, ostriches, antelopes) stay close to giraffes and use them as watchtowers or observation posts for predators []. A giraffe has followers on the savannas; a guru also has followers that gather round him.

“The giraffe (camelopardus) is so called because while it is speckled with white spots like the pard (pardus), it has a neck like a horse, oxlike feet, and a head like a camel (camelus). Ethiopia [meaning Africa] produces this animal.” [The Etymologies of Isidore of Seville, 7th century AD, p.252.]

The neck of the giraffe is the most outstanding feature of the animal. According to Skeat neck originally meant the nape or knop of the neck; from Old English hnecca, ‘nape of the neck’. Compare nook, and knacker

In nature there are two creatures with reticulated patterns on their skin; the giraffe and the python. The python relates to the constellation Delphinus, and Delphi. Zeus released two eagles from opposite ends of the earth, one from the east and one from the west, and the precise spot where they met, was Delphi. Therefore the constellation, Delphinus, should relate to the latitude lines. The giraffe of this long constellation, Camelopardalis, with the long neck extending to the north pole should relate to the longitude line. Reticulum represents the nodes, the connecting lines.