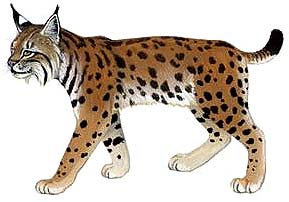 Lynx are solitary animals known for their short tails and characteristic tufts of black hair on the tips of their ears, cheek ruffs that look like a double, pointed beard. They have very large “padded snowshoe paws” for threading the snowy mountains. The presence of this animal in an area may go unnoticed for years. “The Lynx has often played an important role in mythology, because it is such an elusive, ghost-like animal that sees without being seen. Because of it’s qualities of silence and watching, the Lynx has also been associated with scientists, and the search for knowledge” []. They were supposed to be able to see through objects, through walls and underground, Plutarch saying; “the lynx, who can penetrate through trees and rocks with its sharp sight.”  The bob-cat is an American variety of the lynx. The Lynx software program is a web browser used by people to navigate the World Wide Web.

“The lyncurius is so named because it is formed from lynx urine that has hardened with time. Like amber, it is yellow, and it attracts nearby leaves with its spirit. [p.324.]

“People say that its urine hardens into a precious stone called lyncurius. That the lynxes themselves perceive this is shown by this proof: they bury as much of the excreted liquid in sand as they can, from a sort of natural jealousy lest such excretion should be brought to human use. [The Etymologies of Isidore of Seville, 7th century AD, p.252.]

Myth 1. The Danaides, the fifty daughters of King Danaus. King Danaus invited his fifty nephews to visit him from Egypt and marry his daughters. On their wedding night he presented each of his daughters with a dagger and made them all swear to kill their husbands. This they did, except for Hypermestra, who spared Lynceus (‘lynx‘) because he had behaved with honor and spared her virginity. Lynceus took refuge on a hill near Argos. Hypermestra let him know it was safe to return by waving a torch. In memory of this the Argives had a torchlight festival. Lychnis, is from the Greek for ‘lamp’.

Myth 2. While the above Lynceus behaved with honor another lynx character behaved with dishonor in attempting to murder a guest: King Lyncus or Lynkos (‘lynx‘) of the Scythians was taught the arts of agriculture by Triptolemus “That barbarous king was jealous, and to gain himself the credit for that gift so great lavished his hospitality, and when his guest was sunk in sleep, attacked him with a dagger. As he tried to stab his heart…” – Ovid, Metamorphoses 5.643. Or “he refused to teach the arts of agriculture to his people”. Demeter turned him into a lynx.

Myth 3. Another Lynceus was the jealous murderer of Castor (of the adjacent constellation Gemini), along with his brother, Idas. Idas and Lynceus murdered Castor because they all (along with Pollux) sought Phoebe and Hilaeira, daughters of Leucippus. The avenger Pollux [Polydeukes] spears Lynceus where the neck joins and presses the shoulders.  – Ovid, Fasti 5.697

Myth 4. Lynceus was one of the Argonauts and he participated in the hunt for the Caledonian Boar. He was a son of Aphareus and Arene and was said to have excellent sight, even able to see underground.

Lynx comes from the Indo-European root *leuk– ‘Light, brightness’. Derivatives: light¹, lightning, Lucina (the goddess of the moon, who introduces newborns into the light, the same as Luna), luculent (clear or lucid), lux (the International System unit of illumination, equal to one lumen per square meter), Lucifer (morning Venus ‘Bringer of Light‘), luciferin (a chemical substance present in the cells of bioluminescent organisms, such as fireflies), limbers (bending or flexing readily; pliable), limn (to describe), lumen (the cavity or channel within a tubular structure), luminary, luminous, illuminate, (these words from Latin lumen, light, opening), Luna (the goddess of the moon. The same as Lucina), semilunar valve (two valves, one located at the opening of the aorta and the other at the opening of the pulmonary artery, each consisting of three crescent-shaped cusps and serving to prevent blood from flowing back into the ventricles), lunar, lunate, lunatic (effected by the full moon), lune (a crescent-shaped portion of a plane or sphere bounded by two arcs of circles), lunula (a small crescent-shaped structure or marking, especially the white area at the base of a fingernail that resembles a half-moon), mezzaluna (a curved steel blade, often with a vertical handle at each end, used to chop food), (these words from Latin luna, moon), luster, lustrum (a ceremonial purification of the entire ancient Roman population after the census every five years, from Latin lustrum, purification), illustrate (from Latin lustrare, to purify, illuminate), lucubrate (from Latin lucubrare, to work by lamplight, produce scholarship), elucubration (a written work produced by working long and diligently, from Latin lucubrare, to work by lamplight), leuko– (white or colorless in the words: leukoderma, leukocyte, leukopenia, leukorrhea, leukemia (white blood), from Greek leukos), lea (a grassland or meadow, ‘place where light shines’), levin (lightning), from Middle English levin, lucent, lucid (Latin lucidus, from lucere ‘to shine’, from the stem luc– ‘light’), elucidate, pellucid ( per-, through; + lucere, to shine; transparent or translucent. The ovum is surrounded by a transparent wall called the Zona Pellucida), translucent, (these words from Latin lucere, to shine), antelucan (the hours before dawn), link² (a torch formerly used for lighting one’s way in the streets), lychnis (plants of the genus Lychnis, which includes the campions, from Greek lukhnos, lamp), lynx (Greek lunx, German luchs, as if from its shining eyes), ounce² (snow leopard), lucerne (is alfalfa, originally ‘glowworm’), Lucerne is a city of central Switzerland. [Pokorny leuk– 687. Watkins] Some think the Celtic god Lugh is from this root, (variations of his name are: Lug, Lugos, Lugus, Lucoubus, Gaulish Lugubus, Luga, Irish Lug and Welsh Lleu). Names: Lucy, Lucia, Lucius, Lynceus, Lyncus, Lynkos

The lynx is named after the luminescence of its eyes which have expanding irises and reflectors that enable them to hunt effectively at night when they are most active. The lynx is used to symbolize the sense of sight or vision and were credited with the particular ability to be able to see through material things as though these objects were translucent (eagles have another type of sight, they can see for miles but have poor close-up vision). Pliny’s canonical compendium of natural history had called the lynx “the most clear sighted of all quadrupeds.” An eye is an organ of vision that detects light. German luchs, lynx, resembles the word look? Old Norse gaupa, lynx‘, resembles the word gape (to stare wonderingly or stupidly)?

Lynxes live alone in wilderness areas on rugged dry and rocky hills and mountains, leaping over chasms from cliff to cliff, evoking an image of linking a chain of mountains (from link, link in a chain? Maybe Lucy, hailed as the missing link between ape and human?)

The Accademia dei Lincei, ‘Academy of the Lynxes’, is an Italian science academy. Founded in 1603 by Federico Cesi who had named his academy after the lynx and said “… the acuity of the lynx arose from two paired and complementary virtues – sharpness of vision and depth of insight, the outside and the inside, the eye and the mind”, “just as the lynx, with its superior vision, not only sees what lies outside but also notes what arises from inside” (). Cesi and his friends aimed to understand all of the natural sciences. They wrote the Saggiatore of Galileo, and the Tesoro Messicano describing the flora, fauna, and drugs of the New World, which took decades of labor; a reminder of the word elucubration which means a written work produced by working long and diligently, from Latin lucubrare, to work by lamplight. The Linceans produced an important collection of micrographs, or drawings (illustrations), made with the help of the newly invented microscope.

In Rome the Greek word lychnos – Latinized as lychnus – remained the standard term for ‘lamp’ until imperial times, when the Latin word lucerna was used. The generic name for the flowers, Lychnis, is from the Greek for ‘lamp’, and refers to the fact that the felt-like leaves that were formerly used for lamp wicks. Lynchnobius, a Greek compound from lychnos (lamp) and bios (life), meaning one who lives by lamplight.

One famous lamp is the subject of a story in the Arabian Nights. The young boy, Aladdin, acquires a magic oil lamp that, when rubbed, or polished, brings forth a jinni, a genie (from Latin genius), who grants Aladdin’s wishes.

Lynxsive Tigris, the Lynx or Tiger, is the Italian Lince, the German Luchs and Linx, the French Lynx

Its stars may have been those intended by Aratos where he mentioned, {Page 280} in our motto, some in front of the Greater Bear (Ursa Major); but for the modern figure we are indebted to Hevelius (in 1690). He used in it nineteen stars, and in, explaining the title said that those who would examine the Lynx ought to be lynx-eyed, in which he acknowledged the insignificance of the components. Of these Argelander has catalogued 42, and Heis 87; but the boundaries are not accurately determined.

The alternative name, now in disuse, came from the fancied resemblance of the many little stars to spots on the tiger; and the same word was applied by Bartschius in 1624, although as the river Tigris, to some stars that subsequently-were made into the Polish Bull and the Little Fox with the Goose.

In the Lynx appeared in July, 1893, the much-discovered comet of that year, the Rordame-Quenisset.

The constellation seems chiefly noticeable for the beauty of its numerous doubles, of which Espin mentions fifty in his edition of Webb’s CelestialObjects. Of one of these Professor Young writes in his Uranography

38, or rho Lyncis; Mags. 4, 7.5; Pos. 240°; Dist. 2″.9; white and lilac. This is the northern one of a pair of stars which closely resembles the three pairs that mark the paws of Ursa Major. This pair makes nearly an isosceles triangle with the two pairs gamma, mu and iota, kappa Ursae Majoris.

It might well have been utilized by the modern constructor, whoever he was, of our Ursa Major to complete the quartette of feet.

The constellation comes to the meridian in February, due north from the star Castor.