The history of the star: Azelfafage 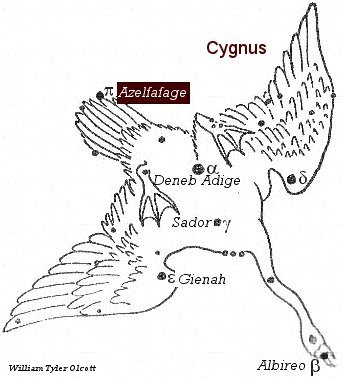 Pi (π) Cygnus, Azelfafage, is a star in the tail of the Swan.

Azelfafage is possibly a corrupted form of Adelfalferes, from Al Thilf al Faras, the Horse’s Foot or Track; and, to quote the German astronomer Ideler (1766-1846),

“It follows either that the foot of Pegasus [now marked by pi (π) Pegasus] extended to this star, or that in this region was supposed to be located the feet of the Stallion (Pegasus) which, as we shall see farther on, some Arab astronomer introduced between Pegasus and the Swan.”

Or the title may be, as seems more probable, from Al ‘Azal al Dajajah, the Tail of the Hen, which it exactly marks. It is sometimes Azelfafge; but {p.198} the 17th century German astronomer Bayer, with whom the word apparently first occurs, had “Azelfageid estTarcuta” (Allen notes the word Tarcuta has escaped commentary from all authorities).

Pi (π), with about twenty other stars in Cygnus, Andromeda, and Lacerta, was comprised in the early Chinese Tang Shay, the Dragon.