The history of the star: Alterf

from p.263 of Star Names, Richard Hinckley Allen, 1889.
[A scanned copy can be viewed on this webpage 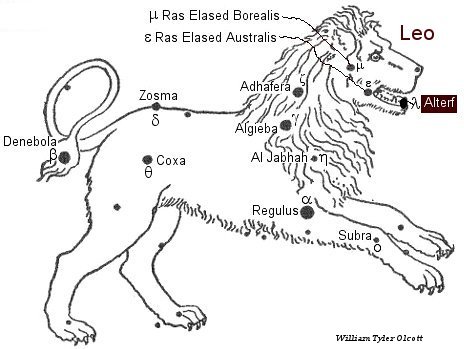 Lambda (λ) Leo, Alterf, is a star in the open mouth of the Lion.

Alterf is from Al Tarf, “The glance” of the lion. Al Tarf is the name for the 7th manzil (Arabic Moon Mansion), which it formed with the unnamed star xi (ξ) Cancer. The word has generally been rendered the Glance, i.e. of the Lion’s eye, although on modern maps the star lies in the open mouth, where the second-century Greek astronomer Ptolemy located it. But it also had the secondary meaning of the Extremity [there is a star in Cancer named Al Tarf, translated “the end”], still more appropriate here, and so understood by the German astronomer Ideler (1766-1846).

The name of this star, Alterf, is from Al Tarf, “The glance” of the lion (the star is actually in the open mouth of the lion), is the name for the 7th manzil (Arabic Moon Mansion) which it formed with the unnamed star xi (ξ) Cancer

With Moon transiting here: plant, build, marry, but do not travel. [Robson, p.71.]

Alpha (α Regulus) Leo was chief star in the 8th nakshatra (Hindu Moon Mansion) that bore its name, Magha, made up by all the components of the Sickle (Leo’s mane and head); alpha (α Regulus described as on the base of the sickle), Gamma (γ Algieba), eta (η Al Jabhah), zeta (ζ Adhafera), mu (μ this star Ras Elased Borealis), epsilon (ε Ras Elased Australis), lambda (λ this star Alterf), and kappa (κ). The symbol of Magha “The Mighty” was a House. The regents were the Pitris (the spirits of the dead ancestors), or Fathers. Ruled by the Dragon’s Tail.