The history of the star: Al Tarf 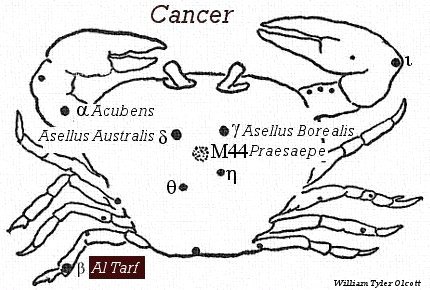 A 4th-magnitude star, is Al Tarf, the End, i. e. of the southern hind foot of the Crab on which it lies.

Allen gives another translation for Al Tarf on p.114 of Star Names: Al Tarf, the End, or, as some translate it, the Glance, i.e. of the Lion’s Eye, because in early Arabic astronomy, the Lion, Leo, extended beyond its present perimeters. Arabs had an enormous Lion, their early Asad, extending over a third of the heavens, of which the stars Arcturus and Spica were the shin-bones; Regulus, the forehead; the heads of Gemini, one of the fore paws; Canis Minor, the other; and Corvus, the hind quarters. Many Arab starnames come from this tradition. Star Names p.97.

Influences: Ptolemy’s observations are as follows: "The two stars in the eyes of Cancer are of the same influence as Mercury, and are also moderately like Mars. Those in the claws are like Saturn and Mercury." By the Kabalists Cancer is associated with the Hebrew letter Tzaddi and the 18th Tarot Trump "The Moon." [Robson, p.33.]

"Shining at the hinge of the year by the blazing turning-point which when recalled the Sun rounds in his course on high, the Crab occupies a joint of heaven and bends back the length of day. Of a grasping spirit and unwilling to give itself in service the Crab distributes many kinds of gain, and skill in making profits; he enables a man to carry his investment of foreign merchandise from city to city and, with an eye on steep rises in the price of corn, to risk his money upon sea-winds; to sell the world’s produce to the world, to establish commercial ties between so many unknown lands, to search out under foreign skies fresh sources of gain, and from the high price of his goods to amass sudden wealth. With heaven’s favour he also sells seasons of idleness at rates of interest to his liking, wishing the swift passage of time to add to the principal. His is a shrewd nature, and he is ready to fight for his profits." [Astronomica, Manilius, 1st century AD, book 4, p.235.]