The history of the star: Algieba

from p.259 of Star Names, Richard Hinckley Allen, 1889.
[A scanned copy can be viewed on this webpage 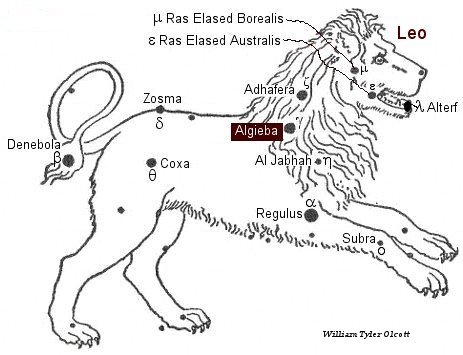 Gamma (γ) Leo, Algieba, is a double star, and perhaps binary, 2.2 and 3.5, bright orange and greenish yellow, in the mane of the Lion, also described as in the blade of the Sickle of Leo which is a star pattern resembling a reversed question mark representing Leo’s mane and head.

“has been improperly called Algieba, from Al jebbah, the forehead; for no representation of the Lion, which I have examined, will justify that position,—”

a well-founded criticism, although as, after Regulus, it is the brightest member of the manzil (Arabic Moon Mansion) Al Jabbah, it may have taken the latter’s title. The star, however, is on the Lion’s mane, the Latin word for which, Juba, distinctly appeared for gamma (γ) with the 17th century German astronomer Bayer, the Italian astronomer Riccioli (1598-1671), and Flamsteed. Hence it is not at all unlikely that Algieba— also written Algeiba,— is from the Latin, Arabicized either by error in transcription or by design.

Alpha (α Regulus) Leo was chief star in the 8th nakshatra (Hindu Moon Mansion) that bore its name, Magha, made up by all the components of the Sickle (Leo’s mane and head); alpha (α Regulus described as on the base of the sickle), Gamma (γ this star Algieba), eta (η Al Jabhah), zeta (ζ Adhafera), mu (μ Ras Elased Borealis), epsilon (ε Ras Elased Australis), lambda (λ Alterf), and kappa (κ). The symbol of Magha “The Mighty” was a House. The regents were the Pitris (the spirits of the dead ancestors), or Fathers. Ruled by the Dragon’s Tail.