The history of the star: Adara 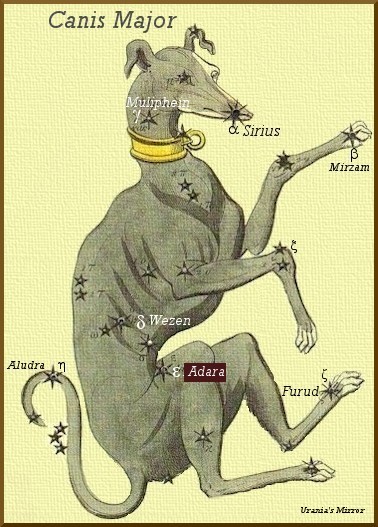 Epsilon (ε) Canis Major, Adara, is a double star, 2 and 9 magnitude, pale orange and violet, on the back leg of the Greater Dog.

Adara, Adhara, Adard, Udara, and Udra are from Al Adhara, which translates as “the Maidens”, or “the Virgins”, applied to this star in connection with delta (δ,  Wezen), eta (η, Aludra), and omicron (ο); perhaps from the Arabic story of Suhail (Suhail is identified with the star Canopus). It has also been designated Al Zara, with probably the same signification, although this form is erroneous.

“The brilliant constellation of the Dog: it barks forth flame, raves with its fire, and doubles the burning heat of the Sun. When it put its torch to the earth and discharges its rays, the earth foresees its conflagration and tastes its ultimate fate [translator’s note: the ecpyrosis of the Stoics, who held that the Universe would ultimately be engulfed in conflagration and all things would return to the condition of primeval fire]. Neptune lies motionless in the midst of his waters and the green blood is drained from leaves and grass. All living things seek alien climes and the world looks for another world to repair to; beset by temperatures too great to bear, nature is afflicted with a sickness of its own making, alive, but on a funeral-pyre: such is the heat diffused among the constellations, and everything is brought to a halt by a single star.

“When the Dogstar rises over the rim of the sea, which at its birth not even the flood of Ocean can quench, it will fashion unbridled spirits and impetuous hearts; it will bestow on its sons billows of anger, and draw upon them the hatred and fear of the whole populace. Words run ahead of the speakers: the mind is too fast for the mouth [translator’s note: the impetuosity of the speaker causes him to utter words before he has time to adapt them to grammar or logic]. Their hearts start throbbing at the slightest cause, and when speech comes their tongues rave and bark, and constant gnashing imparts the sound of teeth to their utterance. Their failings are intensified by wine, for Bacchus [meaning alcohol] gives them strength and fans their savage wrath to flame. No fear have they of woods or mountains, or monstrous lions, the tusks of the foaming boar, or the weapons which nature has given wild beasts; they vent their burning fury upon all legitimate prey.