The history of the star: Aludra

from p.131 of Star Names, Richard Hinckley Allen, 1889.
[A scanned copy can be viewed on this webpage 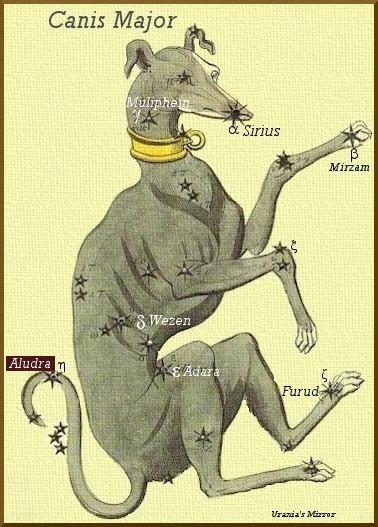 Eta (η) Canis Major, Aludra, is a double star, of 4.7 and 8th magnitudes, yellow and blue on the tail of the Greater Dog.

Aludra is from Al Adhra, the singular of Al Adhara, and one of that group. This title has been universal from the days of Arabian catalogues and globes to our modern lists. [Aludra is from Arabic Al-‘Udhrah, “The maidenhead”, or “the Virgins”, applied to this star along with delta (Wezen), epsilon (Adara), and omicron Canis Major; perhaps from the Arabic story of Suhail.]

The English astronomer Smyth (1788-1865) wrote in his notes on this star eta (η Aludra), “Well may Hipparchus be dubbed the Praeses of ancient astronomers!” for that great man used this star, then at 90° of right ascension, as convenient in astronomical reckoning.