The history of the star: Zavijava 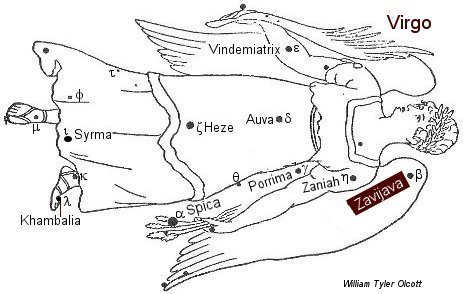 Beta (β) Virgo, Zavijava, is a pale yellow star on the left wing of the Virgin.

Zavijava, a universal name in modern catalogues, is first found with Giuseppe Piazzi, Italian astronomer (1746-1826), but is Zarijan in the Standard Dictionary. It is from Al Zawiah, the Angle, or Corner, i.e. Kennel, of the Arab Dogs,— although gamma (γ Porrima) exactly marks this Corner and should bear the title.

The stars beta (β Zavijava), eta (η Zaniah), gamma (γ Porrima), delta (δ Auva), epsilon (ε Vindemiatrix), outlining this Kennel, formed the 11th manzil (Arabic Moon Mansion), Al Awwa, the Barker, or “the Howler”, which was considered of good omen; while The 14th century Arabian lexicographer Al Firuzabadi included it with the preceding moon station Al Sarfah,— beta (β) Leo (Denebola),— in the group Al Nahran, the Two Rivers, as their rising was in the season of heavy rains. Other indigenous titles were Al Bard, the Cold, which it was said to produce; and Warak al Asad, the Lion’s Haunches.

Beta (β Zavijava) marked the 18th ecliptic constellation of Babylonia, Shepu-arku sha-A, the Hind Leg of the Lion, for this country also seems to have had one of these creatures here. With eta (η Zaniah), it perhaps was Ninsar, the Lady of Heaven, probably a reference to Istar; and Urra-gal, the God of the Great City; and one of the seven pairs of stars famous in that astronomy. As a Euphratean lunar asterism it bore the same title Ninsar, but this included all the components of the Arabs’ Kennel Corner.

These also were the Persian Mashaha, the Sogdian Iranian Fastashat, the Khorasmian Afsasat, and the Coptic people of Egypt Abukia, all of the Arabic signification.

In China it was Yew Chi Fa, the Right-hand Maintainer of Law.

Beta (β Zavijava) is 13° south of Denebola in Leo, culminating with it on the 3rd of May.

This was the star Einstein used during the solar eclipse of Sept. 21st 1922, which fell close to it, to determine the speed of light in space.

“Zavijava probably derives from Al Zawiyah which among other things mean a small Mosque, subsidiary to a larger one nearby. Since such a Mosque is very much a symbol of authority in its locality, as a parish church is in other communities, the idea conveyed here is of someone holding a position of command, but subject to a higher command behind them. Al Araf (another name for this star) ‘Those who Send Forth’ (others to carry out their orders), or ‘Those who are Sent Forth …’ The planetary simile (Mercury-Mars) suggests one who has the intelligence and energy to be sent forth and not need a higher authority to lead”. [The Living Stars, Dr Eric Morse, 1988, Amethyst Books, ISBN 0-944256-02-3].

The astrological influences of the star Zavijava

From Al Zawiah, the Angle or Corner (see Zaniah), but according to Bullinger the name means the Gloriously Beautiful. Symbolically called “Correct Weighing”. [Robson, p.219.]

Reliable worker, attentive to every detail of the job, will make a good salesman, executive, manager or subordinate commander, but needs someone of higher rank to have given him (or her) the job. If less well aspected, he can be the sort of underling who provokes his men to strike or mutiny by over-playing the ‘little Hitler’ act [The Living Stars, Dr. Eric Morse, 68-69, under the name Al Araf.]