The history of the star: Zaniah 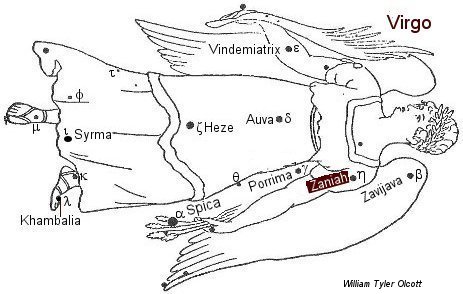 Eta (η) Virgo, Zaniah, is a star on the left arm of the Virgin.

Zaniah is from Al Zawiah, applied in German lists to this instead of to the stars beta (β Zavijava) and gamma (γ Porrima), all of these being in the Kennel.

In China it was Tso Chih Fa, the Left-hand Maintainer of Law.

It lies on the left side of the Virgin, and just to the westward is the point of the autumnal equinox which the Chinese knew as Yih Mun, Twan Mun, or Tien Mun, Heaven’s Gate.

With zeta (ζ Heze) it almost exactly marks the line of the celestial equator.

Eric Morse in The Living Stars says about this Mercury-Venus star; “The name must bring a smile to astrologers who often associate Mercury with money and Venus with love, and Ptolemy having put the money first for Zaniyah means “Adulteress” or “Harlot”. We have seen how Virgo has had such a reputation in past times, having been Lilith and Ashtoreth as much as more honored ladies like Mary. A little amusement is permitted in reading older books in which the word is either not translated at all, or the authors digress into a learned discussion on whether or not this star belongs to a group once known as the “Kennels”, along with the title “little mosque” [for Zavijava], Victorian avoidance of the unmentionable does have its comic side!” [The Living Stars, Dr. Eric Morse, p.69-70.]

The astrological influences of the star Zaniah

According to Ptolemy it is of the nature of Mercury and Venus; and, to Alvidas, of Venus and Mercury in sextile. It gives refinement, honor, congeniality, order and a lovable nature. [Robson, p.218.]

An attribute of Zaniah can be seen in the Mercury-Venus-in-Libra talent for negotiating peace. One attribute which a good commander (or salesman) must surely need is an intuition for knowing to call a halt to battle and either offer or seek terms for peace. If well aspected and on the right planet, Mercury, Venus, Sun, or Jupiter for example this is what will show up in the horoscope. With Mars or Saturn the terms for peace may be too harsh for acceptance; with the Moon or Neptune they may be either unrealistic or downright “shady”. [The Living Stars, Dr. Eric Morse, p.69-70.]

With Venus: Quick in learning, musical and artistic ability, fond of society, many friends, favorable for gain. [Robson, p.218.]

With Mars: Active, energetic, loss through lawsuits, trouble through opposite sex. [Robson, p.218.]