The history of the star: Vindemiatrix 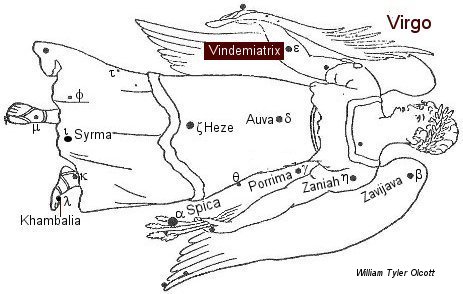 Epsilon (ε) Virgo, Vindemiatrix, is a bright yellow star in the right wing, or right arm, of the Virgin.

This is the Vindemiatrix of the Alfonsine Tables, whence it has descended into modern lists; but in Latin days it was Vindemiator with Columella, which {p.471} is found as late as Flamsteed; Vindemitor, with Ovid (43 B.C.-18?A.D.) and Pliny (23-79 A.D.); and Provindemiator and Provindemia major, with Roman architect Vitruvius (first century B.C.); all signifying the “Grape-gatherer,” from its rising in the morning just before the time of the vintage. These titles were translations of the (Greek) Protrugeter, Protrugetes, protrugetos, and Trugeter, used by the second-century Greek astronomer Ptolemy, Plutarch, and other Greek authors, the first of these words appearing in the Phainomena, and rendered the “Fruit-plucking Herald”; but it is in a line of the poem considered doubtful; the Italian astronomer Riccioli (1598-1671) had Protrigetrix. This profusion of titles from the earliest times indicates the singular interest with which this now inconspicuous star was regarded in classical astronomy. The Century Cyclopedia has the following note on it:

“At the time when the zodiac seems to have been formed (2100 B.C.) this star would first be seen at Babylon before sunrise about August 20, or, since there is some evidence that it was then brighter than it is now, perhaps a week earlier. This would seem too late for the vintage, so that perhaps this tradition is older than the zodiac.”

The classical name was translated by the Arabians Mukdim al Kitaf; and another title was Almuredin, still seen for it, perhaps from Al Muridin, Those Who Sent Forth. Traces of these words are found in the Alacast, Alcalst, Alaraph, and Almucedie of the 17th century German astronomer Bayer’s Uranometria

On the Euphrates it may have been Kakkab Mulu-izi, the Star Man of Fire, possibly symbolizing the god Laterak, the Divine King of the Desert; although that title has been assigned to mu (μ) Virgo and delta (δ) Libra (Zuben Elakribi).

It marked the eastern boundary of the 11th manzil (Arabic Moon Mansion), and in astrology was a mischief-making star. It culminates on the 22nd of May.

Bullinger in Witness to the Stars, a Christian publication, wrote “The star epsilon, in the arm bearing the branch, is called Al Mureddin, which means who shall come down (as in Psa 72:8), or who shall have dominion. It is also known as Vindemiatrix, a Chaldee word which means “the son”, or “branch, who cometh”.

The astrological influences of the star Vindemiatrix

Legend: Vindemiatrix, or as it was originally called, Vindemiator, the Gatherer of Grapes, represents Ampelos, the son of a satyr and a nymph, to whom Bacchus, in token of his fondness, gave a vine planted at the foot of an elm. While gathering grapes Ampelos fell and broke his neck, whereupon Bacchus placed him among the stars as a memorial of his former affection. [Robson, p.214-215.]

According to Ptolemy it is of the nature of Saturn and Mercury; to Simmonite, of Saturn and Venus, which is probably a misprint; to Wilson and Pearce, of Saturn, Venus and Mercury, and, to Alvidas, of Mercury and Saturn in evil aspect. It gives falsity, disgrace, stealing, wanton folly and often causes its natives to become widows. [Robson, p.215.]

On the MC or on the Ascendant this star with its Saturn-Mercury nature is said to help mental concentration and to promote the type of native who engages for architects and businessmen. Tied up with Mars, it results in increased power of thought, tending sometimes to sarcasm and polemics. With Mars also, a danger of injuries is indicated. Badly placed, and especially so if in conjunction with Saturn or Neptune, this star is said to cause a tendency to depressive moods, skepticism a distrustful nature. Tied up with Mercury, this star, if otherwise badly place, will lead to nervous irritability. [Fixed Stars and Their Interpretation, Elsbeth Ebertin, 1928, p.59-60.]

‘The Widow Maker’. It frequently marks the death of one’s partner. It figures strongly and regularly in deaths which are in some way dramatic, newsworthy or are resented in much more than the usual degree by those left behind (assassinations, common criminal murders, executions, airline disasters etc.). Al Muredin `The One Sent Forth in the Faith’. This is often the missionary. This is not to say that everyone with this star strong in their horoscope will go out and preach the gospel to the heathen, although many do indeed feel a strong religious calling. [The Living Stars, Dr. Eric Morse, p.70-72.]

With Moon: Worry, many disappointments, loss through law or writings and theft, bad health, failure in business. [Robson, p.215.]

With Mercury: Impulsive, too hasty, loss through writings and business. [Robson, p.215.]

With Jupiter: Trouble through law or Church, much criticism, many journeys. [Robson, p.215.]

With Uranus: Deformity or disease of spine or back about which native is sensitive and seeks seclusion especially if female, danger of heart trouble, bad for marriage, death through an accident. [Robson, p.216.]

With Neptune: Active, critical, mind hovers between spiritual and material things, loss through speculation and Mercurial matters, mechanical and inventive ability, temporary domestic separations, death of or separation from a child, death through an accident or Saturnian disease. [Robson, p.216.]