The history of the nebula Vertex 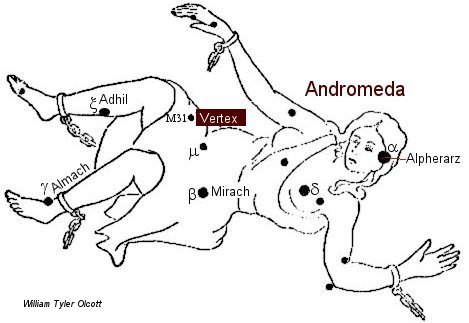 M31Andromeda, Messier 31, or NGC 224, the Great Andromeda Nebula, is a spiral galaxy, a dense cluster of stars situated on Andromeda’s thigh.

This nebula, M31, is referred to as Vertex in astrological programs but as far as I can ascertain this does not appear to be an accepted astronomical title.

It was called the Great Nebula, the Queen of the Nebulae and according to Wikipedia contains one trillion stars. It is said to have been known as far back as A.D. 905, and was described by Al Sufi as the Little Cloud before 986 A.D.

“The man whose birth coincides with the rising of Andromeda from the sea will prove merciless, a dispenser of punishment, a warder of dungeon dire; he will stand arrogantly by while the mothers of wretched prisoners lie prostrate on his threshold, and the fathers wait all night to catch the last kisses of their sons and receive into their inmost being the dying breath. From the same constellation comes the figure of the executioner, ready to take money for a speedy death and the rites of a funeral pyre, for him execution means profit, and oft will he bare his axe; in short, he is a man who could have looked unmoved on Andromeda herself fettered to the rock. Governor of the imprisoned he occasionally becomes a fellow convict, chained to criminals so as to save them for execution. [Manilius,Astronomica, 1st century A.D., Book 5, p.351.]