The history of the star: Theemim 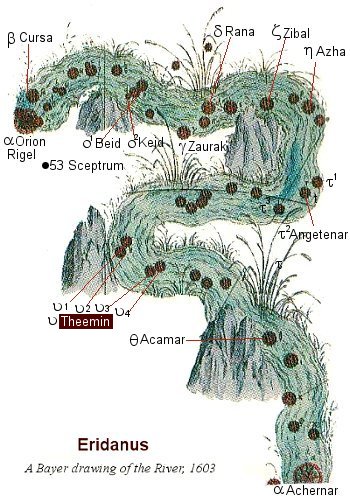 Upsilon (υ) to upsilon (υ ) mark another series of seven stars called in the 17th century German astronomer Bayer’s text Beemim and Theemim. This last, used by Bode and now in current use, is perhaps the Arabic Al Tau’aman and the Jews’ Teomim, the Twins, from the pairs upsilon (υ) upsilon (υ), upsilon (υ), and upsilon (υ). Dutch scholar Grotius (1583-1645) thought it derived either from the foregoing or from an Arabic term for two medicinal roots; but the German astronomer Ideler (1766-1846)’s suggestion that it is from the Hebrew Bamma’yim, In the Water, would seem more reasonable, although we have but few star-names from Judaea, and he intimated that it might be a distorted form of Al Thalim, the Ostrich.

The Almagest of 1515 has Beemun; and the Standard Dictionary, Theemim