The history of the star: Syrma 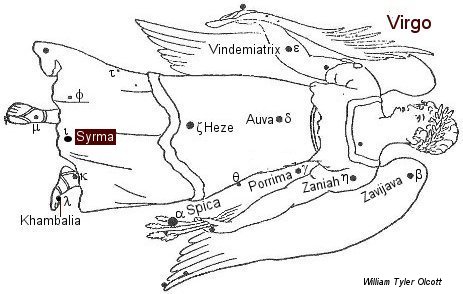 Iota (ι) Virgo, Syrma, is a star in the train of the Virgin’s dress.

Syrma is from Greek Surma, used by the second-century Greek astronomer Ptolemy to designate this star on the Train of the Virgin’s robe.

Iota (ι Syrma), with kappa (κ) and phi (φ) it was mentioned in the first Arabian translation of the Syntaxis as being in the imar, or “skirt,” of the garment; but the translator of the Latin edition of 1515, missing the point at the first letter, read the word as himar, “an ass,” so that this central one of these three stars strangely appears in that work as in asino. They formed the 13th manzil (Arabic Moon Mansion), Al Ghafr, the Covering, as the English astronomer Smyth (1788-1865) explains,

“because the beauty of the earth is hidden when they rise on the 18th Tishrin, or 1st of November; others say on account of the shining of the stars being lessened as if covered;”

“because, when they rise, the earth robes herself in her splendour and finery,— her summer robes.”

The Arabic word, however, is analogous to Greek Surma, and so may have been taken from the second-century Greek astronomer Ptolemy; although the Persian astronomer Al Biruni (973-1048 A.D.) quoted from Al Zajjaj Al Ghafar, the Tuft in the Lion’s tail, which it may have marked in the figure of the ancient Asad [Arabs had an enormous Lion, their early Asad, extending over a third of the heavens, of which the stars Arcturus and Spica were the shin-bones; Regulus, the forehead; the heads of Gemini, one of the fore paws; Canis Minor, the other; and Corvus, the hind quarters. Many Arab starnames come from this tradition. Star Names p.97.] Another signification of the word Ghafr is the “Young Ibex.” The Persian astronomer Al Biruni (973-1048 A.D.) also said that the Arabs considered this the most fortunate of their lunar stations, as lying between the evils of the Lion’s teeth and claws on one side and the tail and venom of the Scorpion on the other, and quoted from a Rajaz poet:

adding that the horoscope of the Prophet lay here, and that the date of the birth of Moses coincided with it.

As a lunar station these stars were the Sogdian Iranian Sarwa and the Khorasmian (east of Persia) Shushak, the Leader; the Persian Hucru, the Good Goer; and the Coptic people of Egypt Khambalia, Crooked-clawed, lambda (λ Khambalia) being substituted for phi (φ); and it is said that they were the Akkadian Lu Lim, the He Goat, Gazelle, or Stag, the original perhaps also meaning “King,” and employed for delta (δ Auva).

Iota (ι  Syrma) alone, according to Hommel, was the Death Star, Mulu Bat

Iota (ι  Syrma), kappa (κ), and upsilon (υ) constituted the 13th sieu (Chinese Moon Mansion), Kang, a Man’s Neck, kappa (κ) being the determining star; while, with the preceding station, the united group was Sheu sing, as Edkins writes it, the Star of Old Age; and, with others near, it may have been included in the Tien Mun mentioned at the star eta (η Zaniah).

Iota (ι Virgo), Syrma, with kappa (κ) and phi (φ) formed the 13th manzil (Arabic Moon Mansion), Al Ghafr, the Covering. Another signification of the word Ghafr is the “Young Ibex.” The Persian astronomer Al Biruni (973-1048 A.D.) said that the Arabs considered this the most fortunate of their lunar stations, as lying between the evils of the Lion’s teeth and claws on one side and the tail and venom of the Scorpion on the other, and quoted from a Rajaz poet: “The best night forever Lies between Al Zubanah and Al Asad;”

With the Moon transiting here: unfortunate for anything. [Robson, p.72.]

The astrological influences of the star Syrma

Said to be prominent in the charts of Mohammed and Moses, the Arabs considered this star as the most fortunate of their lunar stations. [Fixed Stars and Judicial Astrology, George Noonan, 1990, p.32.]

Iota Virgo, Syrma, or Surma by its Greek titles, Al Ghafar is the name in in Arabic. Al Ghafar means to cover, to protect and to suppress. The significance of this star and title lies firstly in the heavy personal responsibility which is implicit in the occult questing and acquisition of spiritual power seen in Khambalia (6 Scorpius) and secondly in the Islamic concept of Istighafar. [The Living Stars, Dr. Eric Morse, p.74.]