The history of the star: Khambalia 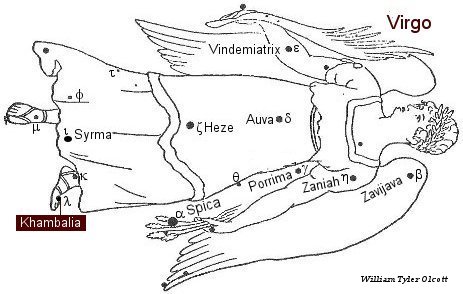 Lambda (λ) Virgo, Khambalia, is a star on the left foot of the Virgin.

Influences: Ptolemy makes the following observations; "The stars in the head of Virgo, and that at the top of the southern wing, operate like Mercury and somewhat like Mars: the other bright stars in the same wing, and those about the girdle, resemble Mercury in their influence, and also Venus, moderately . . . those at the points of the feet and at the bottom of the garments are like Mercury, and also Mars, moderately." By the Kabalists it is associated with the Hebrew letter Gimel and the 3rd Tarot Trump "The Empress." [Robson, p.66-67.]

"Virginis in propriam descendunt ilia sortem",  —  "the belly comes down to the Maid as her rightful lot"  [Astronomica, Manilius, 1st century AD, p.119]

"At her rising Erigone (Virgo, who reigned with Justice over a bygone age and fled when it fell into sinful ways, bestows high eminence by bestowing supreme power; she will produce a man to direct the laws of the state and the sacred code; one who will tend with reverence the hallowed temples of the gods." [Astronomica, Manilius, 1st century AD, p.265]

"The temperaments of those whose span of life she pronounces at their birth Erigone (Virgo) will direct to study, and she will train their minds in the learned arts. She will give not so much abundance of wealth as the impulse to investigate the causes and effects of things. On them she will confer a tongue which charms, the mastery of words, and that mental vision which can discern all things, however concealed they be by the mysterious workings of nature. From the Virgin will also come the stenographer: his letter represents a word, and by means of his symbols he can keep ahead of utterance and record in novel notation the long speech of a rapid speaker. But with the good there comes a flaw: bashfulness handicaps the early years of such persons, for the Maid, by holding back their great natural gifts, puts a bridle on their lips and restrains them by the curb of authority. And (small wonder in a virgin) her offspring is not fruitful." [Astronomica, Manilius, 1st century AD, p.237 and 239]

The astrological influences of the star Khambalia

Of the nature of Mercury and Mars. It causes swift violence, unreliability, changeability, and an argumentative nature. [Robson, p.173.]

Khambalia, Lambda Virginis. It is a Mercury-Mars star by Ptolemy. The name has its roots in old Coptic and means ‘Crooked Claw’, most probably the same device which we call also the Swastika, and whose ancient symbolism contained the idea of a secret knowledge, accessible to us, but only if one knows the way to get to it, as we find also with the symbolism of the maze in other cultures. The word ‘Shambala’ has a similar root and meaning; so has the pentagram, so that the Arabic word for Five, Khamsa, may well also derive from the same piece of mystique. Khamr, wine, also has a connection, being so often a symbol for the ‘secret of life’, ‘the Spirit’ again, as well as the means so often used to enter a transcendental (or just inebriated) state of consciousness. Both Sufi and Alchemical literature are of course rich in this allegorical form. So Khambalia is very much a star of the penetration of secrets and, although within the Constellation of Virgo by the map, its present location by Sign is at 6°38′ of (Scorpius), ‘a long way from home’, and at 12°11′ Libra even when we have corrected its sidereal placing. So the Mars in the simile which Ptolemy gave it is that of Mars in its second rulership, rather than the open energy of Aries. Consequently this star denotes those good at applying intellect to deep research of any kind, to police-type investigation, to espionage, and also to such pursuits as alchemy and the esoteric in general. [The Living Stars, Dr. Eric Morse, p.73.]