The history of the star: Sceptrum 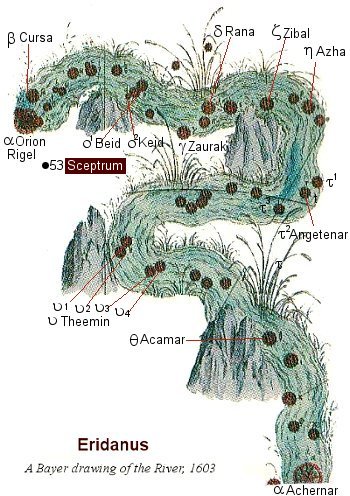 53 Eridanus, Sceptrum, is a star in the north east of the River Eridanus

This star is a “left-over” from the now obsolete (non-IAU) constellation “Sceptrum Brandenburgicum“, the “Brandenburg Sceptre”. It contains four stars, of the 4th and 5th magnitudes, standing in a straight line north and south, below the first bend in the River Eridanus, west from Lepus

The Chinese here had an asterism, Kew Yew, the nine Scallops of a Pennon, but in this they included mu (μ), omega (ω), and of Eridanus.