The history of the star: Ras Elased Australis

from p.260 of Star Names, Richard Hinckley Allen, 1889.
[A scanned copy can be viewed on this webpage 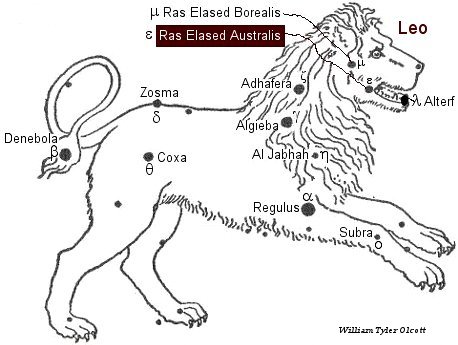 Epsilon (ε) Leo, Ras Elased Australis, is a yellow star in the head or mouth of the Lion.

The Arabians designated this as Al Ras al Asad al Janubiyyah, the Southern Star in the Lion’s Head; but by us it is practically unnamed, although the Century Cyclopedia says “rather rarely Algenubi.” With mu (μ Ras Elased Borealis), it was Al Ashfar, the Eyebrows, near to which they lie on the figure of the Lion.

It marked the 14th ecliptic constellation of Babylonia, Rishu A., the Head of the Lion.

The Chinese knew these two stars as Tsze Fe; while epsilon (ε), individually, was Ta Tsze, the Crown Prince.

Robson (Fixed Stars and Constellations in Astrology) says it was called “He Who Rends”. This star is near Ras Elased Borealis in the Lion’s Head.

Alpha (α Regulus) Leo was chief star in the 8th nakshatra (Hindu Moon Mansion) that bore its name, Magha, made up by all the components of the Sickle (Leo’s mane and head); alpha (α Regulus described as on the base of the sickle), Gamma (γ Algieba), eta (η Al Jabhah), zeta (ζ Adhafera), mu (μ Ras Elased Borealis), epsilon (ε this star Ras Elased Australis), lambda (λ Alterf), and kappa (κ). The symbol of Magha “The Mighty” was a House. The regents were the Pitris (the spirits of the dead ancestors), or Fathers. Ruled by the Dragon’s Tail.

The astrological influences of the star Ras Elased Australis

Note: Epsilon (ε) Leo, Ras Elased Australis, is listed as Algenubi in Robson’s book Fixed Stars and Constellations in Astrology which is an alternative name for this star.

Of the nature of Saturn and Mars, and has been called “He who rends.” It gives a bold, bombastic, cruel, heartless, brutish and destructive nature, but artistic appreciation and power of expression. [Robson, p.123.].

These star in the Lion’s head; ε Leo, Ras Elased Australis, and μ Ras Elased Borealis; are said to indicate those with an appreciation for language and a power of expression, but also those who may be heartless and cruel. [Fixed Stars and Judicial Astrology, George Noonan, 1990, p.32.]

Credited with properties such as conveying higher spiritual gifts of the Logos to those men who are able to conceive them. In primitive natives, this star may become a danger, if bound up with a poorly placed Saturn or Neptune, severe psychological depressions are indicated and possibly even suicide. In conjunction with a ‘strongly’ placed Mars, the Lion’s Head will make for feverish diseases and if conjunct with Uranus, dangers of accidents are present. Bismarck had this fixed star positioned exactly conjunct his Ascendant; this fact as well as the part played by other configurations gave this chancellor his mental superiority. [Fixed Stars and Their Interpretation, Elsbeth Ebertin, 1928, p.50.]