The history of the star: Prima Hyadum 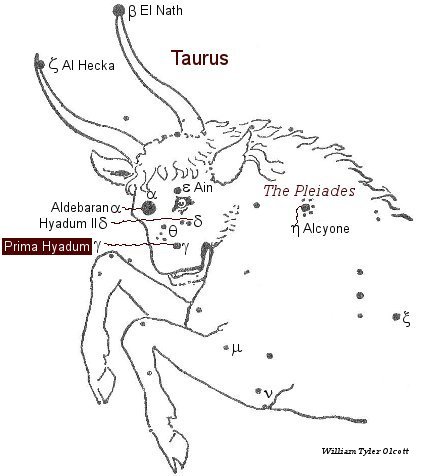 Gamma (γ) Taurus, Prima Hyadum, is the chief star of the Hyades; six stars situated on the face of the Bull.

The Hyades were the seven daughter of Atlas and Aethra, half sisters of the Pleiades, with whom they were entrusted by Jupiter with the care of the infant Bacchus/Dionysus. They were placed among the stars as a reward for their sisterly love, which was evinced by their sorrow at the death of their brother Hyas who was drowned in a well [in another version he was killed by a wild beast in Libya]. The Roman poet Ovid (43BC.-17AD) records that the sisters were grief-stricken and their tears fall on us as rain.

Hyadum is generally seen for this star, and, synonymously, Primus Hyadum, or, more correctly, as with Flamsteed, Prima Hyadum; but this was not original with him, for long before it evidently was an Arabic designation, as Al Achsasi had Awwal al Dabaran, the First of the Dabaran.

Hipparchos (circa 160-120 B.C.) described it as (Greek) en to rugkei, “in the muzzle,” still its location at the vertex of the triangle.

With others adjacent it was Choo Wan, the Many Princes, of China.

Influences: Ptolemy makes the following observations: “Those stars in Taurus which are in the abscission of the sign resemble in their temperament the influence of Venus, and in some degree that of Saturn . . . the stars in the head (except Aldebaran) resemble Saturn, and, partly, Mercury; and those at the top of the horns are like Mars.” By the Kabalists Taurus is associated with the Hebrew letter Aleph and the 1st Tarot Trump “The Juggler.” In all the ancient Zodiacs, Taurus is the beginning sign and marked the Vernal Equinox from about 4,000 to 1,700 B.C. [Robson, p.63.]

“The Bull will dower the countryside with honest farmers and will come as a source of toil into their peaceful lives; it will bestow, not gifts of glory, but the fruits of the earth. It bows its neck amid the stars and of itself demands a yoke for its shoulders. When it carries the sun’s orb on its horns, it bids battle with the soil begin and rouses the fallow land to its former cultivation, itself leading the work, for it neither pauses in the furrows nor relaxes its breast in the dust. The sign of the Bull has produced a Serranus and a Curius, has carried the rods of office through the fields, and has left its plough to become a dictator [eque suo dictator venit aratro]. Its sons have the love of unsung excellence: their hearts and bodies derive strength from a massiveness that is slow to move, whilst in their faces dwells the boy-god Love (Cupido).” [Astronomica, Manilius, 1st century AD, book 4, p.233].

The astrological influences given by Manilius for the Hyades

“The Hyades are a stormy star group and was regarded as a separate constellation. Those born at this time take no pleasure in tranquillity and set no store by a life of inaction; rather they yearn for crowds and mobs and civil disorders. Sedition and uproar delight them; they long for the Gracchi to harangue from the platform, for a secession to the Sacred Mount, leaving but a handful of citizens at Rome; they welcome fights which break the peace and provide sustenance for fears. They herd their foul droves over untilled countryside, for this constellation also begot Ulysses’ trusty swineherd (Eumaeus, or Eumaios, was Odysseus’ swineherd ). Such are the qualities engendered by the Hyades at the rising of their stars”. [Astronomica, Manilius, 1st century AD, book 5, p.308-311].

The astrological influences of the star Prima Hyadum

According to Ptolemy they are of the nature of Saturn and Mercury; and, to Alvidas, of Mercury and Mars. Simmonite likens the Hyades to Mars but this is probably a misinterpretation of Ptolemy’s meaning. They give tears, sudden events, violence, fierceness, poisoning, blindness, wounds or injuries to the head by instruments, weapons or fevers, and contradictions of fortune. [Robson, p.189.]

Striving for prestige leading to power politics leads to tremendous success in life if bridled, if not, failure and a fall from power. May exploit other human beings in quest of power. Staggering increase in sexual urge, a dissolute life, excessive and licentious ways. [Fixed Stars and Their Interpretation, Elsbeth Ebertin, 1928, p.28.]

Saturn-Mercury star in Ptolemy’s coding, which we might well describe as unhappy thoughts and so it shows up when the star is on a difficult spot or planet in a horoscope. But if it be harmonious in aspect, instead, the same star denotes a good clear thinker, writer or speaker. [The Living Stars, Dr. Eric Morse, p.37-38.]

With Moon: Tactful, fair ability, difficulties connected with writings, may forge the name of employer or friend but finally escape punishment and retain position, liable to sickness and disgrace, danger of blindness or eye injuries. [Robson, p.189.]

“The Hyades with Neptune in the 8th causes confused ideas, making ‘world saviors’ and leading to delusions of grandeur”, Vehlow wrote this before 1934. It is therefore hardly possible that he meant this to refer to Hitler in whose nativity Pluto is found in conjunction with the Hyades and nearby positioned is Neptune in the 8th house.” [Fixed Stars and Their Interpretation, Elsbeth Ebertin, 1928, p.28.]