The history of the star: Ain 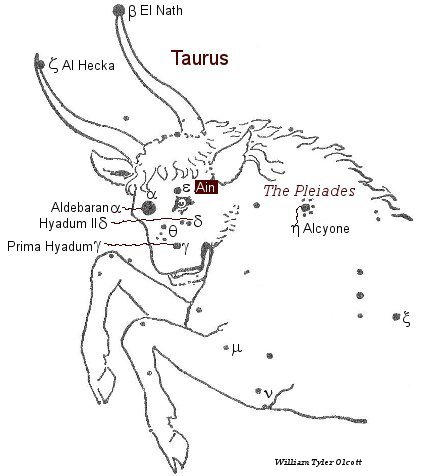 Epsilon (ε) Taurus, Ain, is a star marking the northern eye of the Bull, the left eye, and one of the Hyades group; the six stars situated on the face of the Bull.

See Prima Hyadum for the history and astrological interpretations.

One of the Hyades, according to Whitall, is Ain, from the Arabic Ain, the Eye of the Bull, near which it lies, Flamsteed calling it Oculus boreus, the Northern Eye.

AIN the eye of the bull. AYiN means source of water or well, but it more clearly develops from the body’s source of water, the eye. AYiN or GHaYiN is eye in Hebrew, the entry on p. 70 (see below) shows how OGLE, OCULAR or Middle English eyne (eye) came from this source. Mention is made of the kabbalist Alef as ox (Taurus). The Alef letter glyph depicts an ox, a root heard in that most ALOOF of oxen, the ELEPH(ant) [Note that in Indian astronomy the constellation of Taurus was represented by an elephant]. The Taurus-Venus eye for aesthetics is a gift, but one must be careful of haughty or lustful eye. [Isaac Mozeson, author of The Word, Dictionary].