The history of the star: Porrima 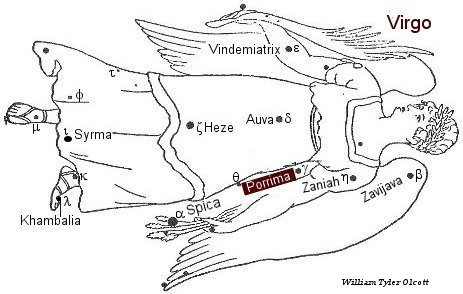 Gamma (γ) Virgo, Porrima, is a white binary star (some call both yellow) and slightly variable in light; 3 and 3.2, on the waist of the Virgin (beside the waist in this drawing).

The Latins called this Porrima, or Antevorta, sometimes Postvorta, names of two ancient goddesses of prophecy, sisters and assistants of (p.470} Carmenta or Carmentis, worshiped and at times invoked by their women. Porrima was known as Prorsa and Prosa by Aulus Gellius of our 2nd century. [Carmenta was the Roman goddess of childbirth. Pierre Grimal (Dictionary of Classical Mythology) says Carmenta was regarded as a divinity of procreation; she was invoked by two names, Prorsa (head first) and Postversa (feet first), the two positions in which a child can be born]

Gamma (γ Porrima) was specially mentioned by the 13th century Persian astronomical writer Al Kazwini as itself being Zawiat al Awwa, the Angle, or Corner, of the Barker; and Al Tizini (Arabian astronomer, first half of 16th century), with the 15th century Tartar astronomer Ulug Beg, had much the same name for it; but the Persian astronomer Al Biruni (973-1048 A.D.), quoting from Al Zajjaj, said that “these people are all wrong,” and that Awwa’ here meant “Turn,” referring to the turn, or bend, in the line of stars. This interesting early figure is noticeable even to the casual observer, gamma (γ Porrima) being midway between Spica and Denebola, the sides of the Kennel stretching off to the north and west, respectively marked by eta (η Zaniah) and beta (β Zavijava), delta (δ Auva) and epsilon (ε Vindemiatrix).

In Babylonia it marked the 19th ecliptic constellation, Shur-mahru-shiru, the Front, or West, Shur (?); while individually it was Kakkab Dan-nu, the Star of the Hero, and the reference point in their annals of an observation of Saturn on the 1st of March, 228 B.C., the first mention of this planet that we have, and recorded by the second-century Greek astronomer Ptolemy. The Chinese knew gamma (γ Porrima) as Shang Seang, the High Minister of State. They culminate on the 17th of May.

“At her rising Erigone (Virgo), who reigned with Justice over a bygone age and fled when it fell into sinful ways, bestows high eminence by bestowing supreme power; she will produce a man to direct the laws of the state and the sacred code; one who will tend with reverence the hallowed temples of the gods.” [Astronomica, Manilius, 1st century AD, p.265]

The astrological influences of the star Porrima

Listed as Caphir in Vivian Robson’s book The Fixed Stars and Constellations in Astrology; – called “An Atonement Offering” and “the Submissive One”. Referring to this title, Eric Morse says:; “The Arabic title Caphir (infidel) no doubt springs from the Islamic revulsion of pagan goddesses”.

According to Ptolemy it is of the nature of Mercury and Venus; to Simmonite, of Mercury alone; and to Alvidas, of Venus and Mars. It gives a courteous, refined and lovable character with prophetic instincts. [Robson, p.153.]

With Sun: Involved in an intrigue, some difficulty of short duration leaving native in unpleasant position. [Robson, p.153.]

With Mercury: Legal troubles, criticism, many worries, business difficulties which will be overcome, ill-health, loses respect of associates. [Robson, p.153.]

With Venus: Unfavorable for gain, much scandal from passionate love affair. [Robson, p.153.]

With Mars: Loss through lawsuits and by fire or storm, trouble with opposite sex, marriage partner and public. [Robson, p.153.]

With Jupiter: Trouble through legal affairs or with the Church, disputes over inheritance, domestic disharmony through intrigue and consequent scandal. [Robson, p.153.]