The history of the star: Muliphein 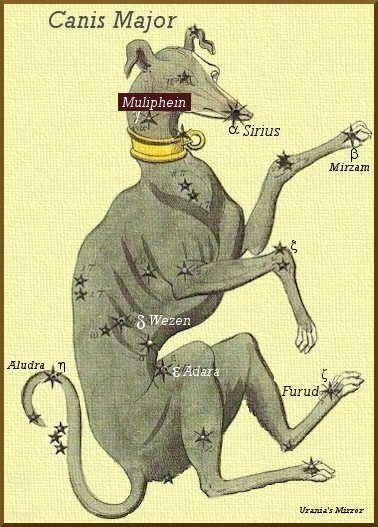 Gamma (γ) Canis Major, Muliphein, is a star situated in the neck of the Greater Dog.

Burritt’s Muliphen properly belongs to delta (δ Wezen) and to stars in the constellation Columba; but the Century Atlas has it Mirza

It is Isis with the 17th century German astronomer Bayer, which the German astronomer Ideler (1766-1846) confirms, but Dutch scholar Grotius (1583-1645) applied the title to the adjacent mu (μ), adding, however, nisi potius quarta sit, thus referring to this star gamma (γ).

This translation of the star-name from Steve Gibson’s pageMuliphein: “the two causing dispute and the swearing of an oath”.