The history of the star: Marsik

from p.244 of Star Names, Richard Hinckley Allen, 1889.
[A scanned copy can be viewed on this webpage under the title chi (χ)] 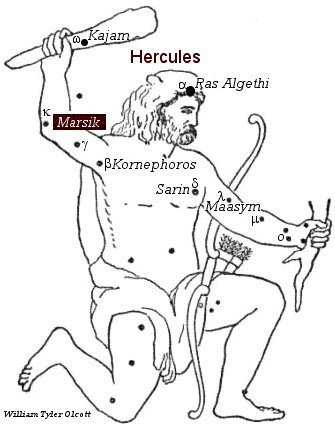 Kappa (κ) Hercules, Marsik, is a star on the right elbow of Kneeling Man.

There is a mix-up with this star, kappa (κ) Hercules, positioned on the right elbow of Hercules – (25SCO45); and chi (χ) Hercules positioned on the left elbow (8SCO16). In astronomy listings this star is unnamed but chi (χ) Hercules is called Marsik. In astrological listings; this star, kappa (κ), is listed as Marsik; chi Hercules is unnamed. R.H. Allen in Star Names says that Ptolemy and the Arabian astronomers located lambda (λ) on the right elbow (where it is here now at 25SCO43), but the English astronomer Smyth (1788-1865) on the left (where chi χ Hercules is now). The confusion of the titles written with the letter probably coming from early confusion with the letter . The Dorians called chi (χ) Kubiton the Elbow. Marfak, Mirfak, Marsia, Marfic, and Marsic are all found for this starkappa (κ) Hercules, –  but it properly is Marfik, from Al Marfik, the “Elbow”. [Lambda Ophiuchus (λ) is named Marfik.]

Hercules, the figure on bended knee and called by the Greek name of Engonasin, about whose origin no certainty prevails. Of this constellation is begotten the desertion, craftiness, and deceit characteristic of its children, and from it comes the thug who terrorizes the heart of the city. If perchance his mind is moved to consider a profession, Engonasin [a Greek title for constellation Hercules meaning Kneeler] will inspire him with enthusiasm for risky callings, with danger the price, for which he will sell his talents: daring narrow steps on a path without thickness, he will plant firm feet on a horizontal tightrope; then, as he attempts an upward route to heaven, (on a sloping tightrope) he will all but lose his footing and, suspended in mid-air, he will keep a multitude in suspense upon himself” [Manilius, Astronomica, 1st century, AD, p.353.]