The history of the star: Marfik

from p.303 of Star Names, Richard Hinckley Allen, 1889.
[A scanned copy can be viewed on this webpage 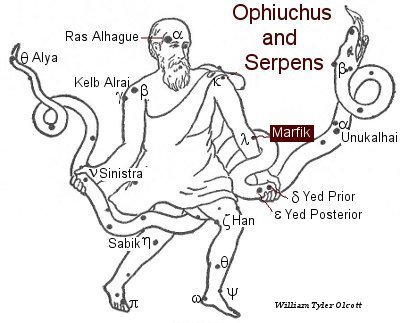 Lambda (λ) Ophiuchus, Marfik, is binary, 3.8 and 6, yellowish white and smalt blue star on the elbow of the Serpent Bearer.

Marfic, or Marfik, is from the similar Arabic Al Marfik, the Elbow, which it marks. The 17th century German astronomer Bayer, Burritt’s Atlas of 1856, and probably others have it Marsic, doubtless from confounding the antique forms of the letters and . This same title appears for kappa (κ) Hercules (Marsik).

With neighboring stars the Chinese knew it as Lee Sze, a Series of Shops.