The history of the star: Kerb

from p.329 of Star Names, Richard Hinckley Allen, 1889.
[A scanned copy can be viewed on this webpage 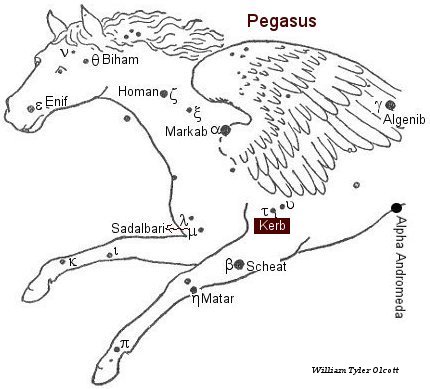 Tau (τ) Pegasus, Kerb, is a star in the Flying Horse.

Tau (τ, Kerb), with upsilon (υ), was the 10th century Persian astronomical writer Al Sufi’s Sa’d al Naamah, which Knobel thinks should be Al Na’aim, the Cross-bars over a well; but they also were known as Al Karab, the Bucket-rope.

The usual titles for tau (τ Kerb)—Markab and Sagma or Salma — are from the 17th century German astronomer Bayer, but the last two should be Salm, a Leathern Bucket.

The astrological influences of the star Kerb

Danger of being jilted by a lover. [Fixed Stars and Judicial Astrology, George Noonan, 1990, p.22.].