The history of the star: Kaffaljidhma 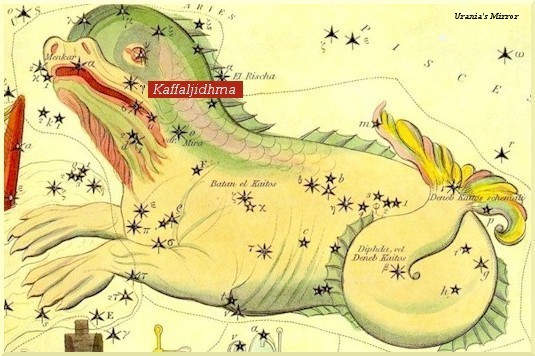 Gamma (γ) Cetus, Kaffaljidhma, is a double star, 3.6 and 7, pale yellow and blue, under the left eye of the Sea Monster.

Kaffeljidhma, Al Kaff al Jidhmah or Al-Kaff al-Jadhma’ (), “The cut-short hand”, (reaching from the Pleiades) is the Arabs’ name for the whole group marking the Whale’s head, but in modern lists is exclusively applied to this star. Those in the head are; alpha (Menkar), gamma (Kaffaljidhma), delta, lambda, mu, xi ¹and xi, were Al Kaff al Jidhmah, “the Part of a Hand”, from a fancied resemblance to their “Stained Hand”, our Cassiopeia