The history of the star: Menkar

from p.162 of Star Names, Richard Hinckley Allen, 1889.
[A scanned copy can be viewed on this webpage 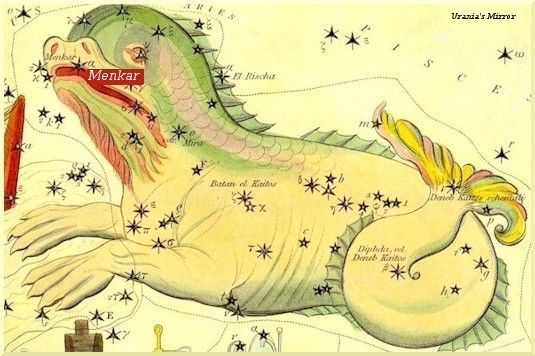 Alpha (α) Cetus, Menkar, is a bright orange star in the open jaw of the Whale, or Sea Monster.

Menkar of the Alfonsine Tables of 1521, the 16th century French scholar Scaliger’s Monkar, and now sometimes Menkab, from Al Minhar (Minħar), the Nose, still is the popular, but inappropriate name, for it marks the Monster’s open jaws. It is the prominent star in the northeastern part of the constellation, and culminates on the 21st of December.

Al Kaff al Jidhmah, found on the Borgian globe, is the 15th century Tartar astronomer Ulug Beg’s and Al Tizini’s (Arabian astronomer, first half of 16th century) designation for it, taken from that for all the stars in the head; but modern lists apply this solely to gamma (γ Kaffaljidhma).

In astrological days it portended danger from great beasts, disgrace, ill fortune, and illness to those born under its influence.

"As the last portion of the Fishes (Pisces) rises, appears the constellation of the Whale, pursuing Andromeda in heaven as on the sea. This monster enlists its sons [those influenced astrologically by Cetus] in an onslaught on the deep and a butchery of scaly creatures; theirs will be a passion for ensnaring the deep with nets spread wide and for straitening the sea with bonds; they will confine in spacious prisons seals which deem themselves as safe as in the open sea and shackle them fast in fetters; the unwary tunny they will draw along in a network of meshes. Their capture is not the end, the fish struggle against their bonds, meet a new assault, and suffer death by the knife, and the sea is dyed, mixed with blood of its own. Furthermore, when the victims lie dead along the shore, a second slaughter is perpetrated on the first; the fish are torn into pieces, and a single body is divided to serve separate ends. One part is better if its juices [sauce] are given up, another if they are retained. In the one case a valuable fluid is discharged, which yields the choicest part of the blood, flavored with salt, it imparts a relish to the palate. In the other case all the pieces of the decaying carcass are blended together and merge their shapes until every distinguishing feature has been lost, they provide food with a condiment of general use. Or when, presenting the very likeness of the dark-hued sea, a shoal of the scaly creatures has come to a stop and cannot move for their numbers, they are surrounded and drawn from the water by a huge drag-net, and fill large tanks and wine-vats, their common endowment of liquid is exuded upon each other, for their inward parts melt and issue forth as a stream of decomposition.

"Moreover, such men [those astrologically influenced by Cetus] will be able to fill great salt-pans, to evaporate the sea, and to extract the sea’s venom [salt], they prepare a wide expanse of hardened ground and surround it with firm walls, next conduct therein waters channeled from the nearby sea and then deny them exit by closing sluice-gates, so the floor holds in the waves and begins to glisten as the water is drained off by the sun. When the sea’s dry element has collected, Ocean’s white locks (salt) are shorn for use at table, and huge mounds are made of the solid foam; and the poison of the deep, which prevents the use of sea-water, vitiating it with a  taste, they commute to life-giving salt and render a source of health." [Manilius, Astronomica, 1st century AD, book 5, p.353, 355.]

The astrological influences of the star Menkar

According to Ptolemy it is of the nature of Saturn; to Simmonite, of Mars; and, to Alvidas, of Venus and the Moon. It causes disease, disgrace, ruin, injury from beasts, sickness, and loss of fortune. [Robson, p.176.]

This star has a Saturnine character, corresponding to impediments of many kinds, worries and tests of endurance. Unjustified enmities, hardening and toughening these people in some ways. In some cases with conjunction of Saturn, Mars or Neptune, diseases of the throat, inflammation of larynx, sometimes danger by suffocation have been noted. These people are advised to take good care of themselves if they have a tendency to throat trouble and to take prophylactic measures. They should avoid overstraining their larynx and should they have special demands regarding the larynx, they are advised to take trouble in the methodical training of their vocal chords etc. [Fixed Stars and Their Interpretation, Elsbeth Ebertin, 1928, p.37.]

If Rising: Legacies and inheritances attended by much evil. [Robson, p.176.]

With Moon: Mental anxiety, hatred of the vulgar, ill-will of women, danger from thieves, sickness to native and family, loss of marriage partner or near relative, quarrels, legal losses, legacies and inheritances attended by much evil. [Robson, p.176.]

With Mercury: Difficulties through writings, difficulty in payment of mortgages, ill-health to marriage partner or relative, destruction of crops. [Robson, p.176.]

With Saturn: Self-seeking, selfish, causes unhappiness to others, much sickness. [Robson, p.177.]

With Neptune: Peculiar early life, loss of or separation from parents abroad, may lose identity and be brought up by foreigners in dishonor, learns of parentage too late in life to obtain advantage, brave, organizing ability, high position, wasted talents, many journeys, violent death frequently by assassination. [Robson, p.177.]