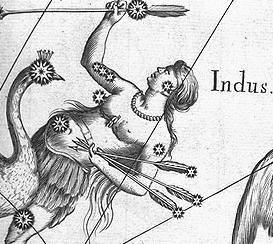 Indus was created between 1595 and 1597 and depicting an indigenous American Indian, nude, and with arrows in both hands, but no bow. Created at the time when Portuguese explorers of the 16th century were exploring North America, the constellation is generally believed to commemorate a typical American Indian that Columbus encountered when he reached the Americas. He was intending to reach India by sailing west and assumed it was ocean all the way around, and when he encountered land he thought for a short time that it was India and called the people he saw Indians. Despite the mistake, the name Indian stuck, and for centuries the native people of the Americas were collectively called Indians []. The peoples of India are, of course, also known as Indians, and the name of the country Indonesia means ‘Indian Island’. Nowadays American Indians are known as Indigenous Americans.

The word Indus comes from the name of India. It originally derived from the river Indus that originates in Tibet and flows through Pakistan into the Arabian Sea. The ancient Greeks called this river Indos. Related words are: Hindu, indigo (Greek indikon, Latin indicum, ‘from India’, a blue dye from India, derived from the plant Indigofera), indium (the element is named after indigo), sandia (a watermelon), sendal (a fabric, from Greek sindon, fine linen), sindon (fine linen fabric). Surnames: Syndall, Sindle

Though not a recognized cognate, the name Indus resembles the Latin suffix indu-, meaning ‘in‘ (From I.E. *en), and cognate with Greek endos, ‘within’, formed from Greek en– ‘in’, + –dos which is the base of domos, literally meaning ‘domain’, or ‘-dom’, hence Greek endos, can mean ‘living within’. Nowadays American Indians are collectively known as Indigenous Americans. Indigenous comes from the Latin indu-gena, (from Old Latin indu, from earlier endo), and -gen, ‘beget’. Indigenous in the strict sense means typically found, living, or originating in a specific place []. Greek endos ‘within’ is the first element in indagate (to search out, investigate), indigent, industry [Klein]. The term indigenous can be used about any ethnic group that have the earliest historical connections to a place, but is generally used of Indigenous Americans in particular as that is the name they choose to call themselves, and this name might have earlier connotations: “Many tribes and nations call themselves, in their own languages, ‘the first people’, the ‘original people’, or the ‘real people'” [The Earth Shall Weep, James Wilson].

This constellation, Indus, might represent Io, the Heifer. Indus and Pavo, the Indian and the Peacock, are two constellations usually depicted together. The Peacock, Argus, or Argos, surnamed Panoptes (pan-, ‘all’, + optes, ‘eyes’), appears to be watching the figure of the Indian. In his Metamorphoses the Roman poet Ovid tells how Io was seduced by Zeus, Hera’s husband. In a vain attempt to hide his crime, Zeus changed himself into a cloud [the Small Magellanic Cloud is close to Indus in the adjacent constellation Tucana] and transformed Io into a Heifer to escape Hera’s detection. Hera was not fooled. She demanded the Heifer as a present, and Zeus could not refuse her without arousing suspicion. Hera tethered Io to the olive-tree appointed Argus to be the guardian of the Heifer. Hermes was sent to distract the guardian and slay him. Hermes, disguised as a shepherd, first put all of Argus’s eyes asleep with boring stories then cut off his head. Hera (Juno) placed the eyes of Argus Panoptes ‘who sees all’, or ‘all eyes’, on the peacock’s tail. These ‘eyes’ are said to represent the stars in the night sky, or the whole starry sky. Argus never slept, he always had half his eyes open and half closed in sleep at any one time. This might relate to the fact that the Sun is shining on half the earth at any one time while the other half is in darkness under the night stars. Hermes/Mercury, messenger of the gods, (a planet travelling close to the Sun, sometimes appearing before, and with the Sun’s rising, at other times with the Sun’s setting), cut off Argus’ head and thus quenching the lights of the eyes; the lights of the stars. The Heifer Io was loosed to roam the world, stung by a maddening gadfly [probably Musca] sent by Hera. Finally, she reached Egypt, and in this country she was at last restored to her original form. As a beautiful young woman once again, Io gave birth to a son named Epaphus, her child by Zeus. She was worshipped in Egypt, and identified with the Egyptian goddess Isis. Isis has many appellations and is linked with a number of stars, she probably represents the Moon in different aspects or phases. In Sanskrit, indu is a term for the moon. Isis is also identified with the constellation Canis Major, or the star Sirius in Canis Major which might represent her later form as a cow with horns, a heifer does not have horns. According to Allen in Starnames, in a temple in Thebes in Egypt Sirius was symbolized, under the title of Isis Hathor, by the form of a cow with disc and horns. On the square zodiac of Denderah, where Sirius is figured as a cow recumbent in a boat with head surmounted by a star. 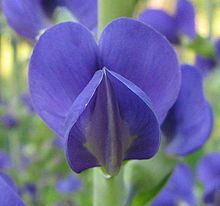 The association of India with indigo is reflected in the Greek word for the “dye”, which was indikon (ινδικόν). The Romans used the term indicum, which passed into Italian dialect and eventually into English as the word indigo []. Indigo is a blue dye from India, derived from the plant Indigofera, and was a rare commodity in Europe throughout the Middle Ages; woad (or glastum), a dye derived from a related plant species, was used instead. Blue jeans are dyed blue with indigo. The blue pigment in woad leaves is the same as in indigo dye, although the Indigofera species yield more dye.

The color electric indigo is used to symbolically represent the sixth chakra (called Ajna), which is said to include the third eye. This chakra is believed to be related to intuition and gnosis (spiritual knowledge) [].

“Liberal American Indian leaders now believe the name ‘Indian‘ was not used by Columbus because he thought he had reached India, but because he called the native people ‘en dios,’ instead of indios as the records show. Thus the word ‘Indian,’ according to the spiritual malfeasance of Liberal linguists, is believed to have derived from ‘en dios,’ or, ‘in God.’” [David Yeagley, FrontPageMagazine

The name Indus and its cognates is not completely understood. Even though the understanding of the meaning of Indios as Columbus intended as ‘una gente en dios‘ (a people in God) is believed to be incorrect, it still may have some relevance in describing the people. David Yeagley goes on to say of Columbas who first encountered the nude people on sub-tropical island in the Bahamas: “The spirituality of these indigenous folk was not something Columbus initially noted, but rather the lack of it. (Of course, to him, spirituality comprised ritualistic Catholicism, so he certainly didn’t associate nakedness with spirituality)”.

Unlike other races these people had no temples or obvious religious ritualism, their type of religion was a more inner thing; they had an intimate relationship with nature, and used intuition and innervisions in their ceremonies. Perhaps the ‘en dios,’ or, ‘in God’ would be more appropriately translated than ‘God within’. The saying of Jesus “… because the kingdom of God is within you.” (17:21b) might also describe the meaning of the name of this constellation.

Indo-gene might be resolved into ‘kingdom inside’. The suffix ‘-gene’ is related to the word ‘king’. Latin prefix indu-, meaning ‘in‘, and cognate with Greek endos, ‘within’, formed from Greek en– ‘in’, and –dos which is the base of domos, literally meaning ‘domain’, or ‘-dom’. Or it might be resolved into  ‘en dios,’ or, ‘God within’.

“Critically, as opposed to those of us who grew up in the Western Christian tradition, the Native American experienced earth as home. … First of all, the ‘Kingdom of Heaven’ is actually happening here and now, not in some mythical place in the future. … According to Native American spirituality, everything is imbued with spirit. Perhaps John Mohawk most eloquently expresses the indigenous relationship to creation when he writes: The natural world is our bible. We don’t have chapters and verses; we have trees and fish and animals. Native American cultures are full of stories about the particular significance of certain rocks or hills, and these are often used in key rituals and rites of passage. These places, especially mountaintops or isolated areas of wilderness, are where, in indigenous cultures, initiation ceremonies take place, people go to fast and pray, and visionary dreams are revealed”  Native American Spirituality

According to the Roman historian Livy, Jupiter Indiges is the name given to the deified hero Aeneas []. Wikipedia elaborates: In Latin calendars of the Augustan age, there is recorded, under the date of August the ninth, a public sacrifice to the Sun (Sol Indiges) on the Quirinal Hill. The meaning of the epithet ‘Indiges‘ here applied to the Sun is ambiguous and has been variously interpreted by modern scholars. If it implies that the Sun was reckoned among the ancient native gods known as Di indigetes, which we may render as Indigenous Gods, it proves that among the Romans the worship of the Sun was of immemorial antiquity, for the Di indigetes belong to the oldest stratum of Roman religion. On this interpretation, which is the most obvious and natural one, the Indigenous Sun (Sol Indiges) is analogous to the Indigenous Jupiter (Jupiter Indiges), who had a sacred grove in Latium near the river Numicius, and whom Roman mythologists afterwards identified with the deified Aeneas [].

From the word Aeneas we get enigma and enigmatic, from Greek ainos ‘tale, story, saying; praise; proverb; riddle’; – “American Indians always have been enigmatic in the minds of Euroamerican scholars” []. The names Eneas, a variant of Aeneas (Greek) ‘he who is praised’, derived from Greek aine meaning ‘praise’. Eneas has 3 variant forms: Enneas, Ennes and Ennis. Aeneas fathered the twins Romulus and Remus with Rhea Silva.

Indus is depicted as an indigenous American Indian with arrows in both hands, but no bow. Arrows are also used as a directional symbol to indicate (from Latin index, indicator, forefinger).