The history of the star: El Nath 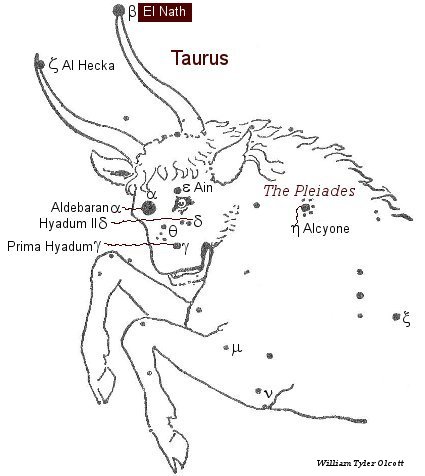 Beta (β) Taurus, El Nath, is a double brilliant pure white and pale gray star, marking the tip of the northern or left horn of the Bull. This star also has the redundant Bayer designation gamma γ Auriga, or γ Aur, which is today very rarely used.

This star, El Nath, beta (β) Taurus, was once the gamma-star of Auriga, it is now astronomically assigned to Taurus and is situated on tip of the left horn of the Bull. It has been considered as belonging to either constellation; Burritt’s Atlas calling it Aurigae or El Nath. As a member of Auriga it lies on the right ankle of the Reinholder (see picture in the constellation Auriga), and was the Arabic Al Ka’b dhi’l Inan, usually translated “the Heel of the Rein-holder” though its position is on the ankle.

The Arabic spelling for El Nath is An-Nath (), “The butting” from Al Natih, “the Butting One”, located on the tip of the northern horn of the Bull, 5° from zeta, (Al Hecka) similarly placed on the tip of the southern horn. This title El Nath, also appears for Aries and its alpha star Hamal

From the earliest days of descriptive astronomy it has been identical with the star Al Nath, the beta (β) of Taurus at the extremity of the right horn, and the Greek astronomer Aratus, circa 270 B.C., so mentioned it. Vitruvius, however, said that it was Aurigae Manus, because the Charioteer (Auriga) was supposed to hold it in his hand, which would imply a very different drawing from that of Rome, Greece, and our own; and Father Hell, in 1769, {p.90} correctly had this expression for the star theta (θ). The later Arabian astronomers also considered it in Taurus by designating it as Al Karn al Thaur al Shamaliyyah, the Northern Horn of the Bull; but the 13th century Persian astronomical writer Al Kazwini adhered to Auriga by giving “the two in the ankles” as Al Tawabi al Ayyuk, the Goat’s Attendants, Ideler identifying these with gamma (γ) and iota (ι).

In Babylonia it was Shur-narkabti-sha-iltanu, the “Star in the Bull towards the North”, or the “Northern Star towards the Chariot”, referring to the Chariot of Auriga, — and marked the 6th ecliptic constellation.

With Capella and other stars in Auriga it was the Chinese Woo Chay, a “Fire-carriage”.

Among the Hindus it represented Agni, the god of fire, and commonly bore that title; as also the similar Hutabhuj, the “Devourer of the Sacrifice”.

Astrologers said that El Nath portended eminence and fortune to all who could claim it as their natal star.

Influences: Ptolemy makes the following observations: “Those stars in Taurus which are in the abscission of the sign resemble in their temperament the influence of Venus, and in some degree that of Saturn . . . the stars in the head (except Aldebaran) resemble Saturn, and, partly, Mercury; and those at the top of the horns are like Mars.” By the Kabalists Taurus is associated with the Hebrew letter Aleph and the 1st Tarot Trump “The Juggler.” In all the ancient Zodiacs, Taurus is the beginning sign and marked the Vernal Equinox from about 4,000 to 1,700 B.C. [Robson, p.63.]

“The Bull will dower the countryside with honest farmers and will come as a source of toil into their peaceful lives; it will bestow, not gifts of glory, but the fruits of the earth. It bows its neck amid the stars and of itself demands a yoke for its shoulders. When it carries the sun’s orb on its horns, it bids battle with the soil begin and rouses the fallow land to its former cultivation, itself leading the work, for it neither pauses in the furrows nor relaxes its breast in the dust. The sign of the Bull has produced a Serranus and a Curius, has carried the rods of office through the fields, and has left its plough to become a dictator. Its sons have the love of unsung excellence; their hearts and bodies derive strength from a massiveness that is slow to move, whilst in their faces dwells the boy-god Love (Cupido).” [Astronomica, Manilius, 1st century AD, book 4, p.233].

The astrological influences of the star El Nath

Of the nature of Mars and Mercury. It gives fortune, eminence and neutrality for good or evil. [Robson, p.164.]

Martian in nature; reputed to be an indication of success. [Larousse Encyclopedia of astrology].

With Mercury: Favor of superiors, but enmity of colleagues, rises to high position or changes vocation, favorable for gain, but many small losses, domestic expenses, often obliged to support an invalid. [Robson, p.164.]

With Venus: Favorable for gain, enemies who are powerless to injure. [Robson, p.164.]

With Jupiter: Success in legal or ecclesiastical affairs, favorable for gain and inheritance. [Robson, p.164.]