The history of the star: Al Hecka 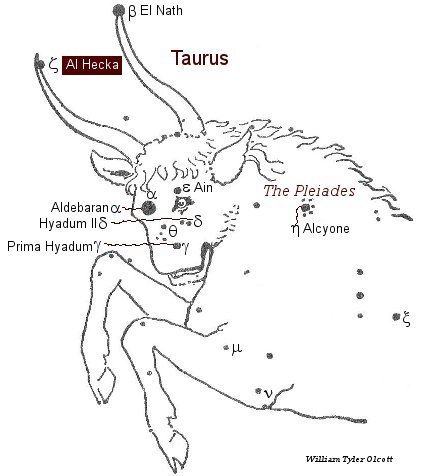 Zeta (ζ) Taurus, Al Hecka, "The Bull’s southern Horn", this star marks the tip of the southern horn of the Bull.

Al Hecka was the determinant star of the 7th ecliptic constellation of Babylonia, Shur-narkabti-sha-shutu, the Star in the Bull towards the South, or the Southern Star towards the Chariot (Auriga).

Reeves gave it, with others near by, as the Chinese Tien Kwan, the Heavenly Gate.

In astrology this star, zeta (ζ Al Hecka), has been considered of mischievous influence.

In slang, to have the ability to deal with difficult situations forcefully and decisively, is to "take the bull by the horns". The horns of Taurus are shaped like a crescent moon. There was an Assyrian saying "to break the horn of the bull" is "to break the power". Taurus, was called the "Breaker" or "Opener" of the new year when it marked the vernal equinox from about 4000 to 1700 B.C. and in astronomical symbolism the bull is shown breaking the annular egg with his horns.

AL HEEK; A bull’s southern horn. In Arabic, hakka is to scratch or gore. Hebrew HaKHaH is a fishing hook, and, of course, the source of English HOOK. Fishing requires patience as well as angling with a hook, so the notable Taurus patience might be a factor here, before there is an explosion of horned anger. Hebrew HaCKeH also means to wait. The star description mentions power, another meaning of the Hebrew and English source of “horn.” The unprovoked AL HEEKA native can be gentle, but when the horns finally do come down, you don’t want to run those Pamplona streets. [Isaac Mozeson, author of The Word Dictionary].

Influences: Ptolemy makes the following observations: "Those stars in Taurus which are in the abscission of the sign resemble in their temperament the influence of Venus, and in some degree that of Saturn . . . the stars in the head (except Aldebaran) resemble Saturn, and, partly, Mercury; and those at the top of the horns are like Mars." By the Kabalists Taurus is associated with the Hebrew letter Aleph and the 1st Tarot Trump "The Juggler." In all the ancient Zodiacs, Taurus is the beginning sign and marked the Vernal Equinox from about 4,000 to 1,700 B.C. [Robson, p.63.]

"The Bull will dower the countryside with honest farmers and will come as a source of toil into their peaceful lives; it will bestow, not gifts of glory, but the fruits of the earth. It bows its neck amid the stars and of itself demands a yoke for its shoulders. When it carries the sun’s orb on its horns, it bids battle with the soil begin and rouses the fallow land to its former cultivation, itself leading the work, for it neither pauses in the furrows nor relaxes its breast in the dust. The sign of the Bull has produced a Serranus and a Curius, has carried the rods of office through the fields, and has left its plough to become a dictator [eque suo dictator venit aratro]. Its sons have the love of unsung excellence: their hearts and bodies derive strength from a massiveness that is slow to move, whilst in their faces dwells the boy-god Love (Cupido)." [Astronomica, Manilius, 1st century AD, book 4, p.233].

The astrological influences of the star Al Hecka

According to Ptolemy it is of the nature of Mars, but Alvidas suggests that of Mercury and Saturn conjoined. It gives violence, male violence and danger of accidents. [Robson, p.125.]

With Sun: Suspicious, reserved, studious, unfavorable for health and especially for the lungs, aptitude for military enterprise and stratagems but danger of deceit and ambushes. [Robson, p.125.]

With Uranus: Legal difficulties, trouble through occultism, danger of imprisonment but help from friends, unfavorable for love and marriage, parental disharmony, little wealth, death from an accident. [Robson, p.126.]

With Neptune: Accidents, secret enemies, great psychic powers, wife may be sickly or die soon after marriage, favorable for gain but many losses in latter part of life, sudden troubles of a Mars nature. [Robson, p.126.]