The history of the star: Deneb Algedi

from p.141 of Star Names, Richard Hinckley Allen, 1889.
[A scanned copy can be viewed on this webpage 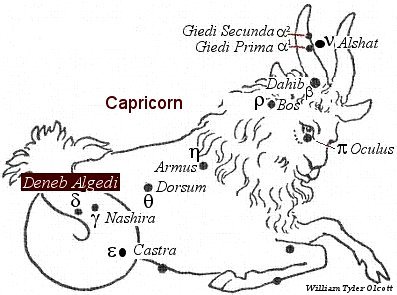 Delta (δ) Capricornus, Deneb Algedi, is a star in the Sea Goat’s tail. According to Robson (p.159) it is symbolically called the “Judicial Point of the Goat”.

With gamma (Nashira) it was Al Sa’d al Nashirah, the “Fortunate One”, or the “Bringer of Good Tidings”.

Deneb Algedi is the transcription by the 15th century Arabic translator Ulug Beg’s Al Dhanab al Jady, the Tail of the Goat; changed to Scheddi in some lists,— a name also found for gamma (γ Nashira).

The German astronomer Ideler (1766-1846) said that these stars (this star δ and γ-Nashira) were Al Muhibbain, the Two Friends, an Arabic allegorical title for any two closely associated objects; but Beigel differed with him as to this, and wrote it Al Muhanaim, the Two Bending Stars,— in the flexure of the tail,— for “moral beings are foreign to the nomad sky.”

It marked the 28th ecliptic constellation of Babylonia, Arkat sha hi-na Shahu, the Eastern One in the Tail of the Goat.

This star marks the approximate position of the discovery of the Planet Neptune on September 23, 1846 by German astronomer Johann Galle.

The astrological influences of the star Deneb Algedi

According to Ptolemy it is of the nature of Saturn and Jupiter; and, to Alvidas, of Uranus and Mercury in Aquarius in opposition to Saturn in Leo. It is said to cause beneficence and destructiveness, sorrow and happiness, and life and death. [Robson, p.159.]

If culminating: Great glory, fame, wealth, dignity and authority by the help of an old clergyman or influential person. [Robson, p.159.]

With Moon: Great difficulties in everything, success after patient plodding but final loss of position. [Robson, p.159.]

With Mercury: Melancholy, quiet, solitary, unkempt or ragged, student of nature, science or philosophy, engaged in trapping animals or reptiles, snakes or poisonous beetles which do not harm the native. [Robson, p.159.]

With Venus: Some secret desire that is never gratified, domestic or family difficulties. [Robson, p.160.]

With Mars: Danger from enemies, accidents, honor and preferment but many quarrels and final disgrace, violent death. [Robson, p.160.]

With Saturn: Great power over animals and poisonous reptiles, indifferent to study, knowledge of many secrets of nature, feared, unpleasant appearance and life, bad for marriage, death of or separation from parents in youth, secluded end of life. [Robson, p.160.]

With Uranus: Many sorrows, engaged in reform, unbalanced mind, may seek someone’s life as a mission, unfavorable for marriage, strange and peculiar or violent death. [Robson, p.160.]