The history of the star: Nashira

from p.141 of Star Names, Richard Hinckley Allen, 1889.
[A scanned copy can be viewed on this webpage 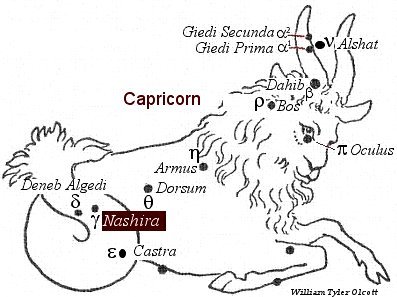 Gamma (γ) Capricornus, Nashira, is a star in the tail of the Sea Goat.

Nashira is from Al Sa’d al Nashirah, the Fortunate One, or the Bringer of Good Tidings, which the early Arabs applied to this when taken with delta (δ Deneb Algedi). The English astronomer Smyth (1788-1865) gave it as Sa’dubnashirah; and the Standard Dictionary repeats this as Saib’ Nasch-ru-ah

The 17th century German astronomer Bayer had the later Deneb Algedi, the Tail of the Goat, that is more proper for delta (δ Deneb Algedi); the Alfonsine Tables of 1521, Denebalchedi, which has degenerated to Scheddi

Gamma (γ Nashira) marked the 27th Babylonian ecliptic asterism, Mahar sha hi-na Shahu, the Western One in the Tail of the Goat.

With delta (δ), epsilon (ε), kappa (κ), and stars in Aquarius and Pisces it was the Chinese Luy Pei Chen, the Intrenched Camp.

Under δ Deneb Algedi Allen says about these two stars γ and δ: The German astronomer Ideler (1766-1846) said that these stars were Al Muhibbain, the Two Friends, an Arabic allegorical title for any two closely associated objects; but Beigel differed with him as to this, and wrote it Al Muhanaim, the Two Bending Stars,— in the flexure of the tail,— for "moral beings are foreign to the nomad sky."

The astrological influences of the star Nashira

According to Ptolemy it is of the nature of Saturn and Jupiter; and, to Simmonite, of Saturn. It causes overcoming by evil, which is turned to success, and gives danger from beasts. [Robson, p.179.]

Dependent on its position in the chart it will bring a life full of change. According to Arabic tradition this star will make a native become a legal advisor or counselor and will give such a person the ability to hold a position of trust. This star makes for integrity and justice and gives a knowledge of man. Therefore we see here a refining Saturn influence, this will be achieved if the natal Saturn is well placed. It is interesting that Deneb Algedi is to be found in three birth charts of present day atomic physicists (names listed in Fixed Stars by Ebertin-Hoffman). [Fixed Stars and Their Interpretation, Elsbeth Ebertin, 1928, p.179.]