The history of the star: Auva 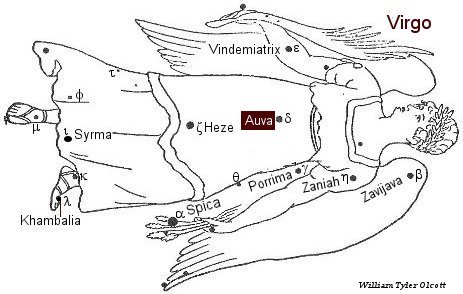 Delta (δ) Virgo, Auva, is a golden yellow star on the hip or stomach of the Virgin.

Delta (δ), although individually unnamed in our lists, was one of the Awwa, the 11th manzil (Arabic Moon Mansion), Al Awwa, the Barker

On the Euphrates it was Lu Lim, the Gazelle, Goat, or Stag,— or perhaps King; and, with epsilon (ε), probably Mas-tab-ba, another of the seven pairs of Twin-stars of that country. The Hindus called it Apa, or Apas, the Waters; and the Chinese, Tsze Seang, the Second Minister of State.

In other publications this star was called Minelauva and Minalauva. It might be that the name ‘Minelauva’ is actually from ‘Min-Al-Awwa’; Awwa means either ‘barker’ or ‘howler’. [Danny Caes, RUG-Public observatory, Armand Pien, Ghent, Belgium.]