The history of the star: Arkab Prior 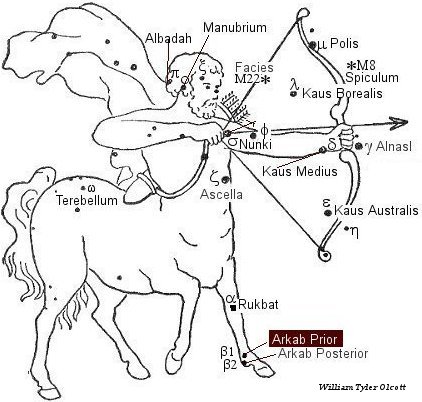 Beta (β) Sagittarius, Arkab Prior, is a star in the constellation of the Archer. There are two beta stars in Sagittarius; this star β, Arkab Prior; and β, Arkab Posterior; the two stars are separated by 0.36°.

Arkab and Urkab are from Al ‘Urkub, translated by Ideler as the “Tendon uniting the calf of the leg to the heel”, or it is the tendon on the leg just above the ankle (in either man or horse), and this coincides with their location in the figure on modern maps, as well as with their Euphratean title Ur-ner-gub, the “Sole of the Left Foot” but Al Sufi and the engraver of the Borgian globe assigned these stars to the rear of the horse’s body.

Alpha (α Rukbat) and the two betas (β, Arkab Prior, and β, Arkab Posterior) were the Arabic Al Suradain, the two Surad, desert birds differently described, — by some as “larger than sparrows” and variegated black and white (magpies?); by others as yellow and larger than doves.