The history of the star: Rukbat 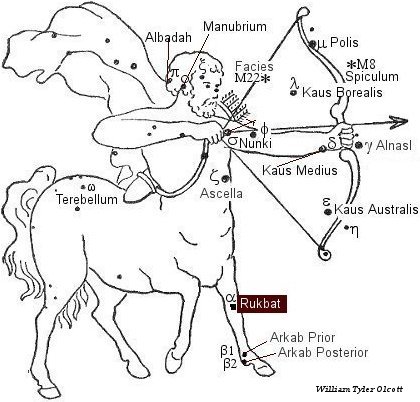 Alpha (α) Sagittarius, Rukbat, is a star on the horse’s knee or leg.

Although figured as alpha it is not the brightest star in the constellation, there are actually ten brighter stars in Sagittarius

Rukbat is variously written Rucba, Rucbah, Rukbah, and Rucbar, from the 15th century Tartar astronomer Ulug Beg’s Rukbat al Rami, the Archer’s Knee; in some early books it is Al Rami, the Archer himself. The Standard Dictionary has Ruchbar ur Ranich

The Euphratean Nibat Anu, already alluded to, may be for this, or for some other of the chief components of the constellation; perhaps for epsilon (ε Kaus Australis) if, in early days, that star was comparatively as bright as now.

This star, alpha, and the two betas were known as Al Suradain, the two Surad, desert birds differently described, — by some as "larger than sparrows" and variegated black and white (magpies?); by others as yellow and larger than doves. [p.357 under beta].