The history of the star: Ancha

from p.54 of Star Names, Richard Hinckley Allen, 1889.
[A scanned copy can be viewed on this webpage 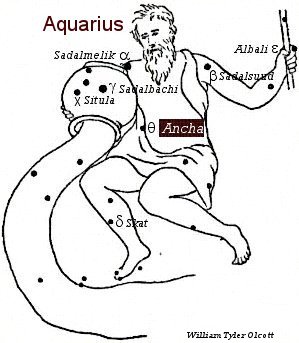 Theta (θ) Aquarius, Ancha, the “Hip”, or “Hipbone” of the Water Bearer, although on most modern atlases the star lies in the belt on the front of the figure.

The word is from the Latin of the Middle Ages, and still appears in the French hanche, our “haunch”. Reeves says that in China it was Lei, a Tear.

The astrological influences of the star Ancha

This star along with Albali can cause danger and can cause persecution and even death, but are also said to give good fortune. [Fixed Stars and Judicial Astrology, George Noonan, 1990, p.40.]