The history of the star: Albali

from p.53 of Star Names, Richard Hinckley Allen, 1889.
[A scanned copy can be viewed on this webpage 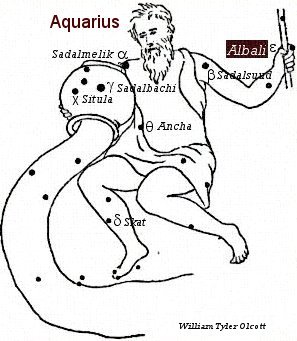 Epsilon (ε) Aquarius, Albali, is a 4th magnitude star in the left hand of the Water Bearer.

Al Bali was the brightest star of the 21st manzil (Arabic Moon Mansion), Al Sad al Bula‘, the Good Fortune of the Swallower, which included mu (μ) and nu (ν); these last also known as Al Bulaan in the dual. The 13th century Persian astronomical writer Al Kazwini said that this strange title came from the fact that the two outside stars were more open than alpha (α) Giedi Prima and beta (β) Dahib of Capricornus, {p.54} so that they seemed to swallow, or absorb, the light of the other! (this star is positioned close to the Capricornus stars mentioned).

The corresponding sieu (Chinese Moon Mansion), Mo, Mu, Niu, Nu, or Woo Neu, a Woman, anciently written Nok, was composed of these stars with the addition of another, unidentified, epsilon (ε, this star Albali) being the determinant; and the same three were the Euphratean lunar asterism Munaχ, the Goat-fish, and the Coptic people of Egypt Upeuritos, the Discoverer.

The 17th century German astronomer Bayer mentioned for it Mantellum and Mantile, marking the Napkin or Towel held in the youth’s hand (Water Pourer’s); but in some early drawings this was shown as a Bunch of Grain Stalks

Dutch scholar Grotius (1583-1645) had Ancha and Pyxis, but neither appropriate; while in our day the former is applied only to theta (θ Ancha), and the latter is never seen as a stellar title except in La Caille’s Pyxis Nautica in Argo.

Eastward from epsilon (ε), near nu (ν), is the Saturn Nebula, N.G.C. (New Galaxy Catalog) 7009, that the largest telescopes show somewhat like the planet.

Al Bali was the brightest star of the 21st manzil (Arabic Moon Mansion), Al Sad al Bula‘, the Good Fortune of the Swallower, which included mu (μ) and nu ν Aquarius; these last also known as Al Bulaan in the dual.

The astrological influences of the star Albali

This star, Albali, along with Ancha, are indicative of danger and can cause persecution and even death, but are also said to give good fortune. [Fixed Stars and Judicial Astrology, George Noonan, 1990, p.40.]