The history of the star: Alya

from p.376 of Star Names, Richard Hinckley Allen, 1889.
[A scanned copy can be viewed on this webpage 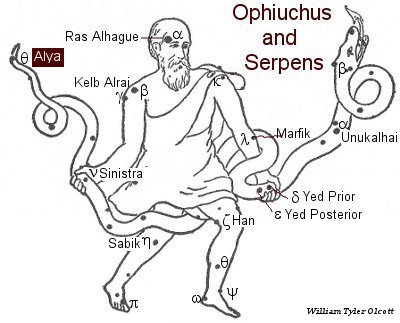 Theta (θ) Serpens, Alya, is a binary star, pale yellow and gold yellow, the terminal star in the Snake’s tail; and lies southwest of Aquila, in a comparatively starless region between the two branches of the Milky Way

The ancient Arabic name for Alya is Al-Alyah (), “The fatty tail of a sheep”.  [In the early days of Arab astronomy a space in the heavens, coinciding with parts of Hercules, Ophiuchus, and Serpens, was the Raudah, or Pasture].

Alya, of the Palermo Catalogue and others (sometimes, but erroneously, Alga), probably is from the same source as the similar title of the lucida (brightest star in a constellation Unukalhai).

The Chinese knew it as Sen, one of their districts.

The astrological influences of the constellation Serpens

Legend: When Glaucus, son of Minos, King of Crete, was drowned in a barrel of red honey, Aesculapius was sent for to restore him to life and was shut in a secret chamber with the body. While he stood wondering what to do a serpent entered, which he slew. Thereupon another serpent came in bearing a herb which it placed on the head of the dead serpent, thereby restoring it to life, and Aesculapius, using the same herb, succeeded in restoring Glaucus. The serpent (Serpens) was placed in heaven and for this reason certain writers have identified Ophiuchus with Aesculapius. According to other accounts the serpent is one of those that would have slain Hercules in his cradle (see Ophiuchus). [Robson, p.61.]

Influences: According to Ptolemy, Serpens is like Saturn and Mars. It is said to give wisdom, craft, deceit, malice, a feeble will and danger of poison. [Robson, p.62.]

Ophiuchus means ‘he who holds the serpent’ and that is how he is depicted. The struggle will last forever, since they wage it on equal terms with equal powers”. [Manilius, Astronomica, 1st century AD, book 1, p.31]