The history of the star: Almach

from p.36 of Star Names, Richard Hinckley Allen, 1889.
[A scanned copy can be viewed on this webpage 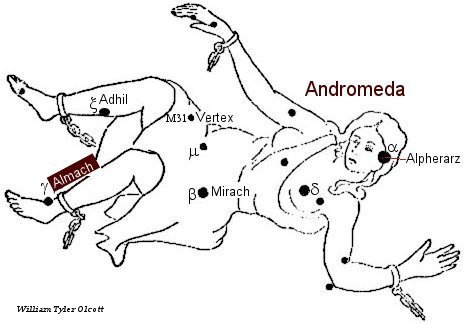 Gamma (γ) Andromeda, Almach, is a ternary star, 2.3, 5.5, and 6.5, orange, emerald, and blue and was thought to be one of the most beautiful objects in the heavens.

This is Alamac in the AlfonsineTables and 1515 Almagest; the Italian astronomer Riccioli’s (1598–1671) Alamak; Flamsteed’s Alamech; now Almach, Almak, Almaack, and Almaac or Almaak; all from Al ‘Anak al ‘Ard [“Earth-kid”], a small predatory animal of Arabia, similar to a badger, and popularly known there as Al Barid [Barid in Arabia is a unit of distance equal to about 19.3 kilometers] the 16th century French scholar Scaliger’s conjecture that it is from Al Mauk, the Buskin [a foot and leg covering reaching halfway to the knee. Another meaning is a Greek tragedy], although likely enough for a star marking the left foot of Andromeda, is not accepted; for {p.37} the 15th century Tartar astronomer Ulug Beg, a century and a half previously, as well as Al Tizini (Arabian astronomer, first half of 16th century) and the Arabic globes before him, gave it the animal’s title in full. But the propriety of such a designation here is not obvious in connection with Andromeda, and would indicate that it belonged to very early Arab astronomy.

Muhammad al Achsasi al Muwakkit (Arab author of a star-list of around 1650) designated this star gamma (γ) as Al Hamis al Naamat, his editor translating this QuintaStruthionum, the 5th one of the Ostriches; but I have not elsewhere seen the association of these birds with this constellation.

In the astronomy of China this star, with others in Andromeda and in Triangulum, was TienTa Tseang, Heaven’s Great General. Astrologically it was honorable and eminent. {p.38} From its vicinity radiate the Andromedes 11, the Bielid meteors [the swarm of meteors connected with Biela’s comet].

Influences: According to Ptolemy the influence of this constellation is similar to that of Venus, though the legend would lead one to suppose some connection with Virgo. It is said to bestow purity of thought, virtue, honor and dignity upon its natives, but to cause battle with chimerical (wildly fanciful, highly improbable) fears and a tendency to become easily discouraged. It gives love between husband and wife and reconciles adulterers. If Mars afflicts the luminaries from Andromeda and especially if in an angle, it causes death by hanging, decapitation, crucifixion or impalement. By the Kabalists it is associated with the Hebrew letter Pé and the 17th Tarot Trump, The Stars. [Robson, p.26.]

“The man whose birth coincides with the rising of Andromeda from the sea will prove merciless, a dispenser of punishment, a warder of dungeon dire; he will stand arrogantly by while the mothers of wretched prisoners lie prostrate on his threshold, and the fathers wait all night to catch the last kisses of their sons and receive into their inmost being the dying breath. From the same constellation comes the figure of the executioner, ready to take money for a speedy death and the rites of a funeral pyre, for him execution means profit, and oft will he bare his axe; in short, he is a man who could have looked unmoved on Andromeda herself fettered to the rock. Governor of the imprisoned he occasionally becomes a fellow convict, chained to criminals so as to save them for execution. [Manilius,Astronomica, 1st century A.D., Book 5, p.351.]

The astrological influences of the star Almach

Of the nature of Venus. It gives honor, eminence and artistic ability. [Robson, p.128.]

Alamak is supposed to give a cheerful nature with a liking for change, diversion and amusement. The popularity of these people will bring benefits from others. Almach is a double star. It has a yellowish-reddish companion which is supposed to have a Martian character. Both stars are moving around a center point. This is supposed to bring about the change in preponderance of the Venus and Mars character alternatively. [Fixed Stars and Their Interpretation, Elsbeth Ebertin, 1928, no.10, p.21, under Alamak]