The history of the star: Al Jabhah 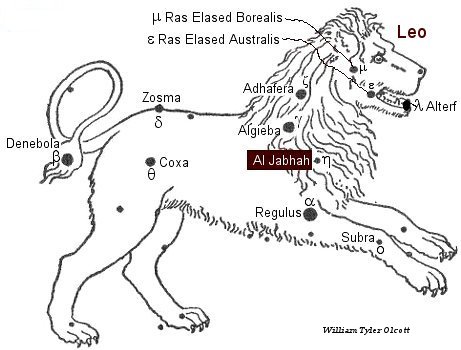 Eta (η) Leo, Al Jabhah, is a star situated on the Lion’s mane.

Alpha (α Regulus) Leo was chief star in the 8th nakshatra (Hindu Moon Mansion) that bore its name, Magha, made up by all the components of the Sickle (Leo’s mane and head); alpha (α Regulus described as on the base of the sickle), Gamma (γ Algieba), eta (η, this star Al Jabhah), zeta (ζ Adhafera), mu (μ Ras Elased Borealis), epsilon (ε Ras Elased Australis), lambda (λ Alterf), and kappa (κ). The symbol of Magha “The Mighty” was a House. The regents were the Pitris (the spirits of the dead ancestors), or Fathers. Ruled by the Dragon’s Tail.

The astrological influences of the star Al Jabhah

Of the nature of Saturn and Mercury. It gives loss and many dangers, a violent and intemperate nature, and to a military officer danger of mutiny and murder by his soldiers. These characteristics are most marked when the star is rising. [Robson, p.128.]