The history of the star: Agena

from p.154 of Star Names, Richard Hinckley Allen, 1889.
[A scanned copy can be viewed on this webpage 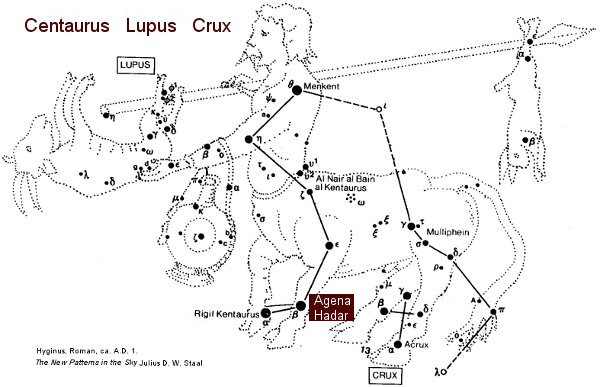 Beta (β) Centaurus, Agena, the 10th brightest star in the sky, is located on the left front knee of the Centaur.

Burritt’s Atlas of 1856 located this near the right fore leg, calling it Agena, but gave no meaning or derivation of the word, and I have not found it elsewhere; the 17th century German astronomer Bayer placed it on the left hind quarter [“Allen, who correctly deciphered the meaning of Bungula (p.152) for alpha (α Toliman), failed to recognize Agena as a similar compound, and gena, the knee”, Greek alpha and Latin gena, “the knee” marking the knee of the centaur’s left front leg — Donald H. Menzel, 1963].

Hadar and Wazn, Ground and Weight [Hadar is said to mean “The settled land”; “as opposed to the desert”], seem to have been applied without much definiteness to alpha (α Toliman) and beta (β Agena) of this constellation, and to stars in Argo Navis, Columba, and Canis Major, probably on account of their proximity to the horizon; the meridian altitude of beta (β Agena), 1000 years ago at Cairo, in 30° of north latitude, being only 4°. The 17th century English orientalist Thomas Hyde, however, said that alpha (α Toliman) and gamma (γ) were the stars referred to by these Arabic titles.

This star beta (β Agena) and alpha (α Toliman) are the Southern Pointers, i.e. towards the Southern Cross (Crux), often regarded as the Cynosure of the southern hemisphere [the northern cynosure, or center of attention, is Polaris or Ursa Minor]

The Bushmen of South Africa knew them as Two Men that once were Lions; and the Australian natives as Two Brothers who speared Tchingal to death, the eastern stars of the Cross (Crux) being the spear points that pierced his body.

“The Centaur, from his own nature assigns qualities to his progeny. Such a one will either urge on asses with the goad and yoke together quadrupeds of mixed stock or will ride aloft in a chariot; else he will saddle horses with a fighter or drive them into the fight [translator’s note; he will load horses with arms or drive them into arms, that is yoked to war-chariots].

“Another knows how to apply the arts of healing to the limbs of animals [translator’s note; these endowments reflect the identification of Centaurus as Chiron] and to relieve the dumb creatures of the disorders they cannot describe for his hearing.

“His is indeed a calling of skill, not to wait for the cries of pain, but recognize betimes a sick body not yet conscious of its sickness”. [Astronomica, Manilius, 1st century A.D, book 5, p.329].

The astrological influences of the star Agena

According to Ptolemy it is of the nature of Venus and Jupiter, but Alvidas suggests an influence similar to that of Mars conjunction Mercury. It gives position, friendship, refinement, morality, health and honor. [Robson, p.117.]

If this fixed star is in connection with Mercury or on the Ascendant and in conjunction with a “benefic”, it can be taken as a promise for happiness and success. Tied up with Venus however, this star will make for pronounced sensuality; if, in addition to this, it is tied up with Mars, Saturn or Neptune, then the native may be subject of gossip or scandal. [Fixed Stars and Their Interpretation, Elsbeth Ebertin, 1928, p.68.]

A significator of success. [Larousse Encyclopedia of astrology].