The history of the star: Adhil

from p.38 of Star Names, Richard Hinckley Allen, 1889.
[A scanned copy can be viewed on this webpage 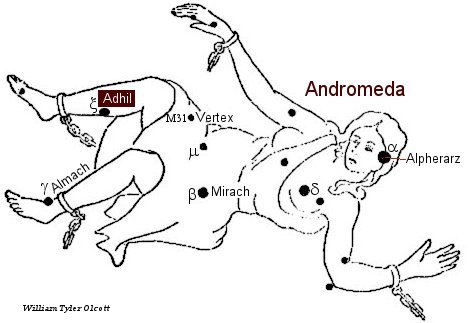 Xi (ξ) Andromeda, Adhil, is a 5th magnitude north star said to be in the train of the dress of the Chained Woman (perhaps in drawings where she is wearing a long dress).

The name Adhil, first appeared in 16th century starmaps, from Al Dhail, the Train of a Garment, the Arabic equivalent of Ptolemy’s (Greek) surma; but Baily thought the title (surma) better applied to the slightly fainter A, which is more nearly in that part of the lady’s dress.

With the surrounding stars, it partook of the nature of Venus.

“The man whose birth coincides with the rising of Andromeda from the sea will prove merciless, a dispenser of punishment, a warder of dungeon dire; he will stand arrogantly by while the mothers of wretched prisoners lie prostrate on his threshold, and the fathers wait all night to catch the last kisses of their sons and receive into their inmost being the dying breath. From the same constellation comes the figure of the executioner, ready to take money for a speedy death and the rites of a funeral pyre, for him execution means profit, and oft will he bare his axe; in short, he is a man who could have looked unmoved on Andromeda herself fettered to the rock. Governor of the imprisoned he occasionally becomes a fellow convict, chained to criminals so as to save them for execution.” [Manilius,Astronomica, 1st century A.D., Book 5, p.351.]