The history of the star: Acubens 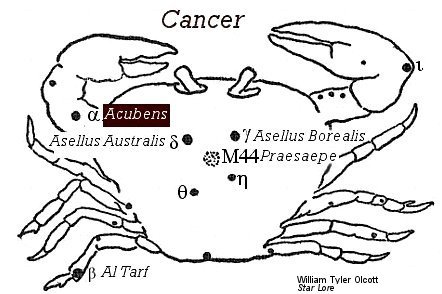 Alpha (α) Cancer, Acubens, is a double star, 4.4 and 11 magnitude, white and red, on the left arm-socket of the Crab.

Acubens, from the ChelaequasAcubenaeChaldaivocant of the AlfonsineTables, from the Arabic Al Zubanah, “the Claws”, this star lies on the southern claw of the Crab (Cancer) near the head of the constellation Hydra. 17th century astronomers transcribed the Arabic names Acubene and Azubene, adding the Roman writer Pliny’s names for it — the Latin Acetabula, the Arm Sockets of a crab, and the Latin Cirros,— properly Cirrus,— the Arms themselves, equivalent to Ovid’s Flagella (Latin for “whip”); others similarly saying Branchiae (Latin for “arm”) and Ungulae (Latin for “claw”). The Arabian title Grivenescos is unintelligible unless it be their form of (Greek) Grapsaios, a Crab. Sartan and Sertan are from the Arabic word for the whole figure (Cancer). The star iota (ι), marking the other claw, shares in many of these titles.

“Shining at the hinge of the year by the blazing turning-point which when recalled the Sun rounds in his course on high, the Crab occupies a joint of heaven and bends back the length of day. Of a grasping spirit and unwilling to give itself in service the Crab distributes many kinds of gain, and skill in making profits; he enables a man to carry his investment of foreign merchandise from city to city and, with an eye on steep rises in the price of corn, to risk his money upon sea-winds; to sell the world’s produce to the world, to establish commercial ties between so many unknown lands, to search out under foreign skies fresh sources of gain, and from the high price of his goods to amass sudden wealth. With heaven’s favor he also sells seasons of idleness at rates of interest to his liking, wishing the swift passage of time to add to the principal. His is a shrewd nature, and he is ready to fight for his profits.” [Astronomica, Manilius, 1st century AD, book 4, p.235.]

The astrological influences of the star Acubens

Of the nature of Saturn and Mercury. It has been called “the sheltering of hiding place,” and gives activity, malevolence and poison, making its natives liars and criminals. [Robson, p.116.]

[Listed as Sartan and Accubens] Alpha Cancri has a Martian nature and a strong blending in of Saturnian influence, conveying an unbalanced and “jumpy” nature. If the chart is a disharmonious one to people effected by it and especially if Acubens is in conjunction with Mars, Sun or Uranus, this will make for an unsettled mentality and helplessness. If in conjunction with Saturn, major disappointments in life, ordeals and trials, mental suffering, excitements, loss, opposition, disputes and deception are indicated. According to Elsbeth Ebertin’s experience, this is the case especially if these persons are in positions of social standing or are politically active. [Fixed Stars and Their Interpretation, Elsbeth Ebertin, 1928, p.49.]

One significance of Acubens is the enforced use of applied intelligence when finding oneself in combat at someone else’s behest, as we may say the Crab’s front leg finds itself driven on by the Mars Al Tarf on the back leg. But a generally more positive quality to read from Acubens is that of a sharp intellect and ease of coming to grips with problems, for which one might earn public renown. But, again there is the note of doing this under pressure of others demanding ‘from behind’. [The Living Stars, Dr. Eric Morse, p.50.]