The history of the star: Zuben Hakrabi 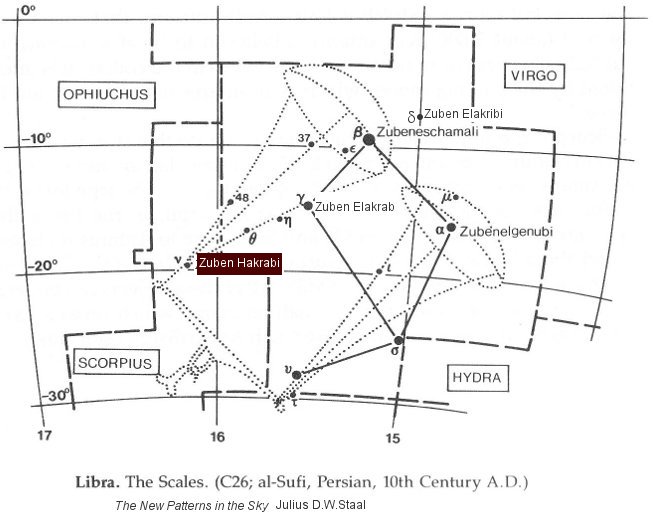 Nu (ν) Libra, Zuben Hakrabi, is a star in the west of the southern Scale of Libra.

History and Legend: Libra was not considered a separate constellation by the ancients and was called Chelae, or the Claws of Scorpius, which sign was made to consist of 60°. The present constellation figure is said to represent the balance wherein Astraea weighed the deeds of men and presented them to Jupiter. [Robson, p.49.]

Influences: Ptolemy makes the following observations: "Those stars at the points of the claws of Scorpio operate like Jupiter and Mercury: those in the middle of the claws, like Saturn, and in some degree like Mars." By the Kabalists, Libra is associated with the Hebrew letter Heth and the 8th Tarot Trump "Justice". [Robson, p.49-50.]

"Balancing night with the length of day when after a year’s space we enjoy the new vintage of the ripened grape, the Scales will bestow the employment of weights and measures and a son to emulate the talents of Palamedes, who first assigned numbers to things, and to these numbers names, fixed magnitudes, and individual symbols. He will also be acquainted with the tables of law, abstruse legal points, and words denoted by compendious signs; he will know what is permissible and the penalties incurred by doing what is forbidden; in his own house he is a people’s magistrate holding lifelong office. Under no other sign would Servius [Servius Sulpicius Rufus, ca. 106-43 BC, extolled as the greatest of jurists by Cicero] more fittingly have been born, who in interpreting the law framed legislation of his own. Indeed, whatever stands in dispute and needs a ruling the pointer of the Balance will determine"  [Manilius, Astronomica, 1st century AD, book 4, p.239]