The history of the star: Zosma

from p.260 of Star Names, Richard Hinckley Allen, 1889.
[A scanned copy can be viewed on this webpage 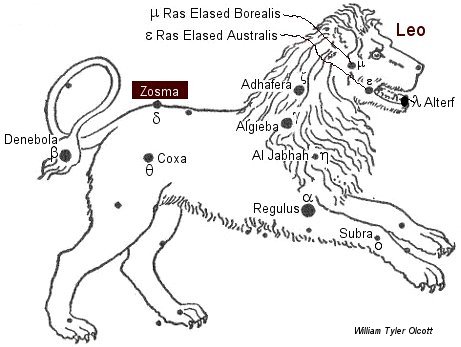 Zosma and Zozma is a Persian word meaning “the Girdle”, “Enzonement” or “Loincloth”.

Zosma and Zozma are from Greek Zosma, an occasional form of Greek zoma, the Girdle, found in the Persian Tables; but its propriety as a stellar title is doubtful, for the star is on the Lion’s rump, near the tail.

Delta (δ) Leo, Zosma, with theta (θ Coxa) on the hind quarter, constituted the 9th manzil (Arabic Moon Mansion), Al Zubrah, the Mane, and itself bears this name as Zubra,— strange titles for star and station so far away from that feature of the animal (nowhere near the Mane of our present Lion figure, Arabs had a much larger lion). Delta (δ this star Zosma) and theta (θ Coxa) also were Al Kahil al Asad, the Space between the Shoulders of the Lion; and Al H-aratan, sometimes transcribed Chortan, and translated the Two Little Ribs, or the two Khurt, or Holes, penetrating into the interior of the Lion; but all these seem as inapplicable as are the other titles.

On the Euphrates Delta (δ) Leo, Zosma, with theta (θ Coxa), were Kakkab Kua, the constellation of the god Kua, the Oracle [according to this website on the Sumerian language; the word kakkab means constellation, and is also translated star, and the word kua seems to have three meanings; “fish”, “god”, and “oracle”], and hence according to Noonan (see below) these stars gave the ability to prophesy.

In Egypt, according to Hewitt these stars, Delta (δ) Leo, Zosma, with theta (θ Coxa), were Mes-su, the Heart of Su [messu is Egyptian for “anointed one,” from which the word “messiah” comes (source, p.410.). The child Horus was the messu of the inundation. (source, p.525.)].

In Sogdiana (an Iranian people) they were “Wadha, the Wise”.

In Khorasmia, Armagh, the “Great”.

With the Copts (who are now the Christians in Egypt) they were Pikhorion, the Shoulder.

In China delta (δ this star Zosma) was Shang Seang, the Higher Minister of State.

Delta (δ this star Zosma) with theta (θ Coxa)Leo, on the hind quarter of the Lion, constituted the 9th manzil (Arabic Moon Mansion), Al Zubrah, the Mane, and itself bears this name as Zubra,— strange titles for star and station so far away from that feature of the animal (nowhere near the Mane of our present Lion figure, Arabs had a much larger lion).

With Moon transiting here: plant, marry but do not navigate. [Robson, p.70.]

In India they marked the corresponding nakshatra (9th Hindu Moon Mansion), Purva Phalguni, delta (δ this star Zosma) being the junction star between the two Phalguni asterisms. Purva Phalguni refers to “The Lucky One,” Phalguni literally means “fruit” (). Purva Phalguni, The Former Bad One. The symbol is a Bed or Couch. Regents, the Adityas, Aryaman and Bagha. Ruled by Venus.

Influences of the 9th Hindu Moon Mansion Purva Phalguni: A severe asterism belonging to the Brahmin caste and favorable for acts of disgrace, destruction, deceit, imprisonment, beating, burning and poison when containing the Moon. Those born on the lunar day will be fond of women, dancing, art and trade, will remain youthful and deal in natural produce. With Moon here at birth native will be generous, handsome, submissive, of wandering habits and good speech. Rules uninhabited houses and the right arm. [Robson, p.79.]

The astrological influences of the star Zosma

Of the nature of Saturn and Venus. It causes benefit by disgrace, selfishness, egotism, immorality, meanness, melancholy, unhappiness of mind and fear of poison, and gives an unreasonable, shameless and egotistical nature. [Robson, p.219.]

Its reputation is that of giving an alert mind, but also inclination to melancholic moods. Conjunct with so called ‘malefics’, danger by poison and disease of the intestinal tract are indicated. These interpretations have to be considered with utmost caution and restraint. [Fixed Stars and Their Interpretation, Elsbeth Ebertin, 1928, p.55.]

Ability to prophesy. On the Euphrates the star theta (θ Coxa), along with this star delta (δ Zosma), was the god Kua, the Oracle. [Fixed Stars and Judicial Astrology, George Noonan, 1990, p.32.]