Created by Bayer in 1603, this constellation used to be called PiscisVolans, the Flying Fish, before it was shortened to Volans

Volans, a fish flying, evokes the idea of a thing in a foreign environment; “a fish out of water” is a metaphor for something being out of its element; a stranger, exile, foreign. The Mediterranean flying fish is called Exocoetus exiliens, from Latin exilium, exsilium, ‘exile’. 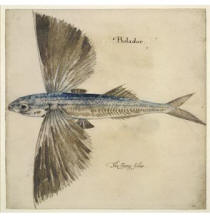 Flying fish are bony fishes of the family Exocoetidae from tropical waters. They have winglike pectoral fins that can be spread to glide over the water. Flying fish are unique because they are the only fish that can actually get into the air. The term Exocoetidae (exo-koitos, from exo ‘outside’ + koitos ‘bed’, ‘lying down outside’ or ‘sleeping under the stars’) refers to the common occurrence of stranded flying fish lying in boats. “Flying fish can attain enough height to carry them onto the decks of ships in their waters, where their remains are frequently discovered at dawn” [Encyclopædia Britannica]. The Exocet guided missile is named after these fish []. They have a similar shape to an airplane, see picture here

“’Flying ones’ (volucres, plural of the adjective volucer, ‘flying,’ and also of the substantive volucris, ‘bird’) from flying (volare), for we say ‘fly’ (volare) and ‘walk’ (ambulare) from the same root. The term vola means the middle part of the sole of the foot or the palm of the hand, and for birds vola is the middle part of the wings, by whose motion the feathers are put into action, hence volucer.” [The Etymologies of Isidore of Seville, 7th century AD, p.264.]

Another translation of the same text:

“Birds are called volucres, flying creatures, from volandum, flying, For what we call ‘walking’ and ‘flying’ stem from the same mechanism. For what we call vola, the hollow, or middle part of the foot or the hand, is in birds the middle part of the wings – at the junction with the shoulders – by whose motion the flight feathers are activated; hence their name, volucres” http://www.abdn.ac.uk/bestiary/translat/25v.hti

The word volar, is from Latin vola, ‘hollow of the hand or foot’.

Volo ‘I wish’ is said from voluntas ‘free-will’ and from volatus ‘flight,’ because the spirit is such that in an instant it pervolat ‘flies through’ to any place whither it volt ‘wishes'” [Varro: On The Latin Language, p.215]

Vallum ‘small winnowing-fan,’ from volatus ‘flight,’ because when they swing this to and fro the light particles volant ‘fly’ away from there. [Varro: On The Latin Language, p.131.]

The RudolphineTables have this constellation, Volans, as Passer, the Sparrow, Passer domesticus, the house sparrow, from the Latin term passer for true sparrows and similar small birds.

The Flying Fish is positioned under Argo Navis, the celestial ship:

“Of the monster called the flying-fish. There is a sea monster called the flying-fish, which has huge wings. When it sees a ship under sail on the sea, it raises its wings over the water and tries to keep pace with the ship for three or four miles; when it fails to keep pace, it lowers its wings and folds them. The waves carry it, exhausted, back to its home in their depths. The flying-fish represents this world. The ship symbolizes the righteous, who sail through its storms and tempests without putting their faith in danger or at risk of shipwreck. But the flying-fish, which could not keep up with the ship, represents those who at the start apply themselves to good works, but do not afterwards persevere with them and yield to all sorts of vice, which carry them, like the restless waves of the sea, down to hell. For the prize goes not to those who begin the race, but to those who stay the course” [The Aberdeen Bestiary