The history of the star: Tureis

from p.74 of Star Names, Richard Hinckley Allen, 1889.
[A scanned copy can be viewed on this webpage 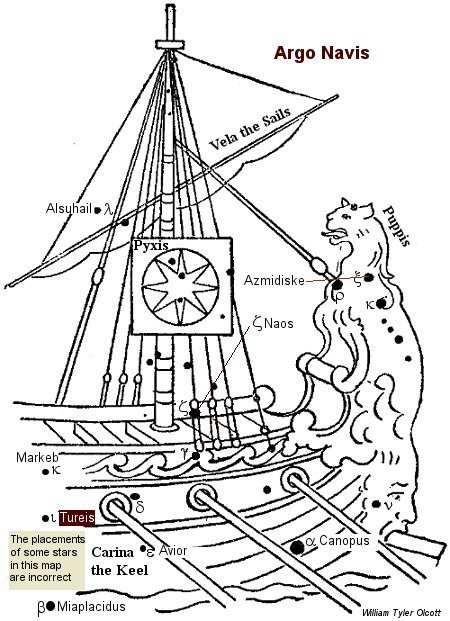 Iota (ι) Carina, Tureis, is a pale yellow star in the Keel of the Ship Argo Navis

According to WikipediaTureis is a traditional Arabic name for two different stars: this star iota Carina, and also rho Puppis

This was the Latins’ Scutulum, or Little Shield, the Arabians’ Turais, probably referring to the ornamental Aplustre at the stern of the Ship in the subdivision Carina; but the 17th century English orientalist Thomas Hyde, quoting it as Turyeish from Tizini, said that the original was verbum ignotum, and suggested that some one else should make a guess at it and its meaning. The English astronomer Smyth (1788-1865) wrote of it as "corresponding to the (Greek) Aspidiske of the second-century Greek astronomer Ptolemy"; but the latter described it as being in the Akrostolion, Gunwale (according to this website the akrostolion is the ornament placed on the stem of an ancient Greek ship, thus symbolizes sea trade), and located kappa (κ), xi (ξ), omicron (ο), pi (π), sigma (σ), and tau (τ) in the Aspidiske, or Aplustre, where they are shown today. The Century Atlas follows the English astronomer Smyth (1788-1865) in calling iota (ι) Aspidiske. It is visible from the latitude of New York City.