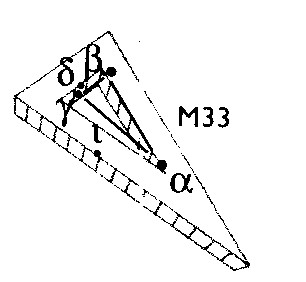 “There follows, with two equal sides parted by one unequal, a sign seen flashing with three stars and named Deltoton, called after its likeness [.e. called after its deltoid shape]”. [Manilius, Astronomica, 1st century A.D, p.33]

A triangle is a geometric shape that has three sides. There are two triangles in the sky, each suggesting a trinity. The Southern Triangle, Triangulum Australe, was called the ‘Three Patriarchs’ and might be a masculine trinity. The word patriarch (pa-tri-arch) has its feminine counterpart in matriarch, which can be broken down into ma-tri-arch ‘three mother archetype’, or, ma-tribe-arch, which is the usual understanding of the word; a mother who rules her family or tribe (the words triangle, tribe and three come from the same Indo-European root *trei- ‘Three’). The Northern Triangle, Triangulum, has feminine associations, it represents the island of Sicily and was put in the sky at the behest of Demeter (Roman Ceres), or was a wedding present to her daughter Persephone. The three goddesses Persephone, Demeter and Hecate (also called Hecate Triformis ‘three forms’, and Hecate Trivia ‘three ways’) are seen as a type of trinity. The northern triangle was also given the title ‘theMitreofSaintPeter‘. The word mitre or miter (from the IE root *mei ‘To tie’), is a triangular hat, and related to the word mitochondrion, the mitochondria DNA is inherited and transmitted exclusively by our mothers.

Triangulum‘s titles: “Sicilia (sicily), Trinacria (from treis akrai with reference to the ‘three promontories’ of Sicily), and Triquetra are those of the ancients for the similarly shaped island of Sicily, — that Ceres/Demeter had begged of Jove/Jupiter might be reproduced in the sky, — triangular from its three promontories, Lilybaeum, Pelorus (said to be built by Orion), and Pachynus” [Allen, Star Names]. Jupiter gave Sicily to Persephone (daughter of Ceres) as a wedding present on her marriage to Pluto.

“Sicily (Sicilia) was named ‘Sicania‘ after king Sicanus, then ‘Sicily‘ after Siculus, the brother of Italus. But in earliest times it was known as Trinacria, because it has three acra (‘capes’), that is, promontories: Pelorus, Pachynum, and Lilybaeum. Trinacria is in Greek what in Latin would be triquetra, as if divided into ‘three pieces’ (tresquadrae). It is separated from Italy by a narrow strait, and looks out upon the African Sea; it has rich soil and abundant gold, and is riddled with caves and tunnels, full of winds and sulfur; accordingly the flames of Mount Etna show themselves there. In this strait Scylla and Charybdis either swallow up ships or smash them. This island first produced from the river Achates the agate (achates) stone. Its sea produces coral and it yields the Agrigentian salts, which dissolve in fire and crackle in water. Its entire circumference is three thousand stades (i.e. 375 Roman miles). Sallust (see Histories 4.26) moreover says that Sicily used to be joined to Italy, but that the intervening space was divided by the onslaught of the sea and cut across its narrowest part.” [The Etymologies of Isidore of Seville, 7th century AD, p.296.]

The sickle of Saturn’s (Cronus), the sickle with which Saturn used to castrate his father, Uranus, fell on Sicily. This sickle was given to Saturn by his mother Gaia (Earth) who created the element of grey flint and shaped a great sickle from it, according to Hesiod, or she made the sickle of adamant, according to Apollodorus [].

“It is appropriate that Saturn’s sickle that fell on the island of Sicily was also said to be responsible for its fertility, although Macrobius also admits that the sickle symbolizes the (destructive) passing of time” (i.e. the Grim Reaper). [Medieval Mythography, Jane Chance, P. 73.]

Latin sicilis, ‘a sickle‘ resembles Latin Sicilia, Sicily, said to be from Siculi, an ancient people who emigrated to the island.

This constellation was called Orbis terrarum tripertitus as representing the three parts of the then known earth, Europe, Asia, and Africa. For thousands of years the geographical position of Sicily at the center of the Mediterranean made it a natural crossroads, or intersection, for people to meet and trade. This is reflected in the genetic structure of the Sicilians. Sickle cell disease afflicts about four thousand Sicilians, it originated in Africa and was carried to Sicily in ancient times, and it seems to have been confined to there until recent migrations.

The sickle of Saturn’s (Cronus) fell on Sicily. It fell on a place now called Trapani that was originally named Drepanon, from the Greek word for ‘sickle’ from drepane, sickle, drepanoid, sickle-shaped. Another legend says it is the sickle which fell from the hands of the goddess Demeter. 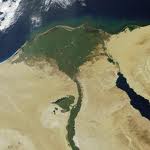 Nile River delta, as seen from Earth orbit, from NASA

The constellation was known in ancient times as Deltoton because its triangular shape resembled the capital letter, D, delta (Δ), in the Greek alphabet, and was associated with the Nile Delta. NiliDonum, was a title from Herodotus, “the Gift of the Nile”. A delta really is a gift given by a river. A river delta is the area where a river splits into smaller streams called tributaries when it meets the ocean. Deltas are formed from the deposits of the sediment carried by the river, and as the flow reaches the mouth of the river it slows down due to the pressure of the sea or ocean. Over long periods of time, this deposition builds the characteristic geographic pattern of a river delta []. Over time tributary networks are formed which channels the river throughout the delta. Reciprocal to a tributary is a distributary, a river that branches off of and flows away from the main stream. Distributaries are most often found in river deltas []. These channels, or tributaries, from time to time change course and divide up a delta into districts, separating lands and people. This must be how the word ‘tribe‘ came into being. Tribes would often demand a tribute to use their section of their tributary. The word tributary is from Latin tribus ‘tribe’, used in the sense of ‘division, part’, originally ‘division into three’ (from I.E. roots *tri- “three” + *bheu- ‘to be’). 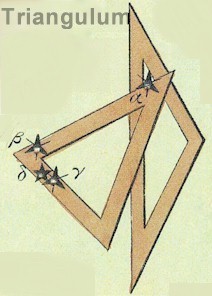 Deltoton bears, and from the shape a Name;

But those that grace the sides dim Light display

And yield unto the Basis brighter Ray.

Triangulum, the NorthernTriangle, is the German Dreieck, the French and English Triangle, and the Italian Triangolo, appeared as Triangulus in the RudolphineTables, always qualified {Page 415} as major till the Lesser Triangle was discarded. It lies just south from gamma Andromedae on the edge of the Milky Way, and although small and faint notwithstanding our poet’s description, is one of the old constellations evidently more noticed by the ancients than by us. They drew it as equilateral, but now it is a scalene figure, beta, delta, gamma at the base and alpha at the vertex.

Hood strangely said that it was placed in the heavens only that the head of Aries might be better known, which recalls the blunder of Aratos as to the faintness of Aries’ stars.

It was Deltoton with the earlier Greeks, from their similarly shaped letter (delta), to which Ovid in his Nux likened it; as did Aratos in his lines that Brown renders, more literally than rhythmically:

Below Andromeda, in three sides measured

Like-to-a-Delta; equal two of them

As it has, less the third, yet good to find

Transcribed by Cicero and Hyginus as Deltoton, it became Deltotum with the Romans, as well as with astronomers to the 17th century. Naturally it also was Delta, and so, associated with Egypt and the Nile, became Aegyptus, Nilus, NiliDomum, the Home of the Nile, which originally was NiliDonum, the Gift of the Nile, from Herodotus’ potamou doron, “the river’s gift.”

Trigonon, used by Hipparchos and Ptolemy, became Trigonum with Vitruvius, and Trigonus with Manilius, translated Trigon by Creech. Tricuspis, Three-pointed, and Triquetrum, the Trinal Aspect of astrology, are found for it; while Bayer had Triplicitas and Orbisterrarumtripertitus as representing the three parts of the earth, Europe, Asia, and Africa; and TriangulusSeptentrionalis, to distinguish it from his own Southern Triangle (Triangulum Australis).

Pious people of his day said that it showed the Trinity, its shape resembling the Greek initial letter of Dios while others of the same sort likened it to the MitreofSaintPeter

Its titles Sicilia (Sicily), Trinacria (In Latin, Sicily is Trinacria), and Triquetra (Latin tri-, “three”, and quetrus, “cornered” see a triquetra shape here) are those of the ancients for the similarly shaped island of Sicily, — that Ceres (Greek Demeter) had begged of Jove (Roman Jupiter, Greek Zeus) might be reproduced in the sky, — triangular from its three promontories, Lilybaeum, Pelorus, and Pachynus, and at times identified with the mythical Thrinakia of the Odyssey, the pasture-ground of the Oxen of the Sun, that Gower called Mela’s Holy Oxland. In modern days it has been noted as the site of the famous Palermo Observatory.

It was here that was discovered by Piazzi, on the first New Year Day of the present century, the first minor planet, which he named {Page 416} Ceres Ferdinandea (now called Ceres) in joint honor of the patron goddess of the island and of his king, the Bourbon Ferdinand of Naples; but the adjective (Ferdinandea) has been dropped by astronomers as not conforming to their rule of mythological nomenclature for the planets, — a rule, however, much deviated from in recent times in the naming of these little bodies. Perhaps the astronomers have exhausted their classical dictionaries! It was found as an 8th-magnitude star —  Flammarion says as a comet — between Aries and Taurus, coincidentally not far from our Triangulum, the ancient Sicilia; but it was little imagined at the time that 433 similar bodies would be found in the next ninety-seven years, more than 150 of them since 1892, and all but seven of these last by photography, then an unknown art.

The Jews are said to have known it as Shalish, from the name of an instrument of music of triangular shape, or with three cords, mentioned in the 1st BookofSamuel, xviii, 6. This same figure, for the three bright stars of Aries, has already been noticed at gamma of that constellation.

The Chinese asterism TsienTaTseang, Heaven’s Great General, included this with lambda of Andromeda and the stars of the Smaller Triangle.

This, like many other important discoveries, was by a happy accident, — Piazzi, very differently, being in search of an extra star, the eighty-seventh of Mayer’s list, wrongly laid down in Wollaston’s catalogue. Recent measurements by Barnard show that Ceres is only a little less than 500 miles in diameter, and thus the first in size of the minor planets as in order of discovery.

The first of such discoveries by the camera was by Wolf on the 20th of December, 1891, of Brucia, No. 333; the first applications of the new art to the heavens having been made with the daguerreotype process by Doctor John W. Draper, of New York City, on the moon in 1840; again, by the professional Whipple of Boston, under Bond’s direction, at the Harvard Observatory, on the star Wega in 1850; and at the same place on Mizar and Alcor in 1857. The first photograph of a star’s spectrum was in 1872; of a nebula, in 1880; of a comet (near the sun during the latter’s total eclipse), in 1882; and of a meteor, in 1891.