The history of the star: Terebellum 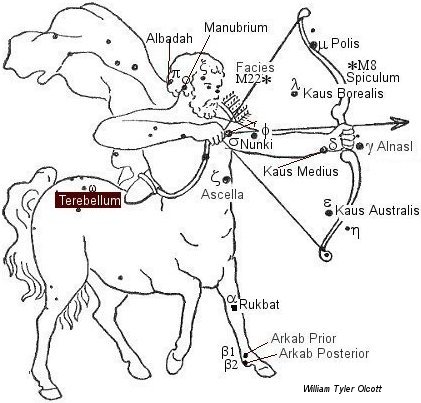 Omega (ω) Sagittarius, Terebellum, with faint stars A, 5; , 4.7; and , 4, forming a small quadrangle on the hind quarter of the figure of the horse in Sagittarius

These stars were the (Greek) tetrapleuron of the second-century Greek astronomer Ptolemy, which the 17th century German astronomer Bayer repeated in the Low Latin Terebellum, still often seen for these stars. The Standard Dictionary gives it thus, but mentions the components as omega (ω), or a, and

The Chinese knew this little figure as Kow Kwo, the Dog’s Country.

The astrological influences of the star Terebellum

It gives a fortune but with regret and disgrace, cunning, a mercenary nature and repulsiveness. [Robson, p.213.].