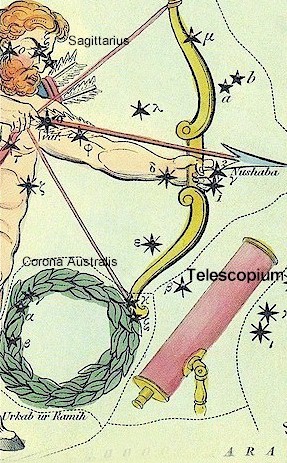 A telescope (from the Greek tele, far off, and skopeo or skeptomai, to look at or view) is an instrument designed for observing the night sky. The starry sky is represented by the adjacent constellation Pavo, the Peacock, with ‘eyes’ on its tail symbolizing the starry firmament.

A telescope is an optical instrument for making distant objects appear nearer and larger, consisting of tubes with an arrangement of lenses, or of one or more mirrors and lenses, by which the rays of light are collected and brought to a focus and the resulting image magnified.

Galileo built his own telescope in 1609 but called it perspicillum in 1610, before he adopted the word telescopio. Nicolas-Louis de Lacaille originally called this constellation TubusAstronomicus, in honor of Galileo’s 1610 invention. Telescopium is depicted as a simple refracting mirror in Urania’s Mirror (pictures of the constellations). There are two major types of optical telescopes: refracting telescopes, in which the image is formed by passing through a lens, and reflecting, where the image is formed bouncing off a curved mirror. More modern variants can employ both reflecting and refracting elements [].

Telescopium is also a verb meaning ‘to force together one inside another’, like the sliding tubes of some telescopes.

Telium is the spore case of rust fungus that bears teliospores, also called teleutospore (spores of rust fungus). In myth Achilles wounded Telephus (‘far-shining’, or tele-, far-, + phusis, growth, nature as in -phyte) in the thigh with his lance or spear. The wound would not heal and Telephus asked the oracle of Delphi which responded in its usual mysterious way that ‘he that wounded shall heal’. Telephus convinced Achilles to heal his wound in return for showing them the way to Troy, thus resolving the conflict []. Achilles healed him by scraping off the rust of his Pelian spear and wiping it onto the wound [as homeopathy; ‘like with like’]. The Paleoproterozoic era (2500 to 1600 mya) is known for “Rusting of earth, depletion of oceanic Fe in banded iron formations” [].

Asklepios’ son Telesphoros, was in charge of recovery. He was a boy whose face was always covered with a cowl and a Phrygian cap. He symbolized recovery from illness, as his name means ‘bringing fulfillment’ in Greek. Representations of him occur mainly in Anatolia and the area around the Danube []. [His father Asklepios is identified with Ophiuchus

Telum‘ (tela, plural) was basically means a missile weapon that is thrown at a distance. Teliferous means bearing darts or missiles.

“The weasel (mustela) is so named as if it were a long mouse (mus), for a dart (telum) is so named due to its length” [Isidore The Etymologies. p.254.] “A missile (telum) is so called after a Greek etymology, from the word telothen (“from afar”); it is anything that can be thrown a long distance. Metaphorically, a sword is also called a telum, as in this verse (Vergil, Aen. 9-747):  But (you will not avoid) this telum that my right hand wields with force. Properly speaking, however, a telum is named for its length – just as we call a weasel mustela because it is longer than a mouse (mus).” [Isidore The Etymologies. p.363.]

The mustelid (‘long mouse’), or weasel family (includes the badger, mink, otter, and weasel) contains some of the world’s most elongated, snake-like mammals. They are described as “tube-shaped animals” []; “they have no apparent shoulders or hips, so the general impression is of a slim, furry tube ending in an excitable, bottlebrush tail” []. Weasels are said to have evolved this body design in order to “weasel out” prey from holes or burrows. The Greek name for this animal is gale; a word that might be related to the name of the inventor of the telescope, Galileo Galilei. In Ovid’s Metamorphosis Galanthis, or Galinthias, the nurse of Alkmene, is turned into a weasel (Greek gale).

Paleolithic or ‘Old Stone Age’ is a term used to define the oldest period in the history of humankind. The Paleolithic lasted for some 2.5 million years, from the first stone tools until the end of the last glacial period 10,000 years ago. (Some members of the mustelid family are the only non-primates to use tools).

Telescopium, or Tubus Astronomicus, was formed by La Caille between Ara and Sagittarius on the edge of the Milky Way, but in such irregular form that it encroached upon four of the old constellations; eta Sagittarii having been taken as beta to mark the Telescope’s stand; delta Ophiuchi for its theta; sigma was in Corona Australis; and gamma was the nu of Scorpius. Bode had it in his Gestirne of 1805 as the AstronomischeFernrohr, crowding it in between Sagittarius and Scorpio; but Baily and Gould restricted it to the south of Scorpius, Sagittarius, and Corona Australis

Gould assigned to it 87 naked-eye stars’, the brightest a 3½-magnitude.

Small as these are, two bore individual titles in Chinese astronomy; a being known as We, Danger; and gamma as the mythological ChuenShwo

The constellation culminates on the 13th of August, at the same time as Wega (Vega) of the Lyre (Lyra).