The history of the star: Sulaphat

from p.287 of Star Names, Richard Hinckley Allen, 1889.
[A scanned copy can be viewed on this webpage 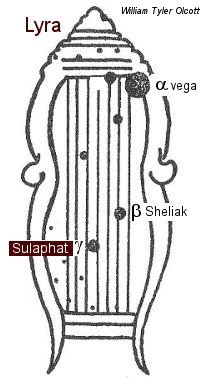 Gamma (γ) Lyra, Sulaphat, is a bright yellow star in the Lyre.

2½˚ east of beta (β Sheliak) is Sulafat, "The tortoise", from another of the titles of the whole constellation.

Jugum, formerly seen for it, may have come from a misunderstanding of Bayer’s text, where it probably is used merely to designate the star’s position on the frame of the Lyre, his words being ad dextrum cornu, Ζυγόν, Iugum, — a fair example of the indefiniteness of much of his stellar nomenclature.

Sulafat or Sulaphat is from Arabic As-Sulahfah, "The tortoise"(), referring to the legendary origin of the instrument associated with Lyra. Hermes found an empty shell of the tortoise cast upon the shore with the dried tendons stretched across it and used it as a plucked string musical instrument.

Influences: "According to Ptolemy Lyra (a musical instrument) is like Venus and Mercury. It is said to give an harmonious, poetical and developed nature, fond of music and apt in science and art, but inclined to theft. By the Kabalists it is associated with the Hebrew letter Daleth and the 4th Tarot Trump, The Emperor". [Robson, p.51.]

"… and one may see among the stars the Lyre, its arms spread apart in heaven, with which in time gone by Orpheus charmed all that his music reached, making his way even to the ghosts of the dead and causing the decrees of hell to yield to his song. Wherefore it has honour in heaven and power to match its origin: then it drew in its train forests and rocks; now it leads the stars after it and makes off with the vast orb of the revolving sky". [Manilius, Astronomica, 1st century AD, book 1, p.30]

"Next, with the rising of the Lyre, there floats forth from Ocean the shape of the tortoise-shell (testudinis ), which under the fingers of its heir (Mercury) gave forth sound only after death; once with it did Orpheus, Oeagrus’ son, impart sleep to waves, feeling to rocks, hearing to trees, tears to Pluto, and finally a limit to death. Hence will come endowments of song and tuneful strings, hence pipes of different shapes which prattle melodiously, and whatever is moved to utterance by touch of hand or force of breath. The child of the Lyre will sing beguiling songs at the banquet, his voice adding mellowness to the wine and holding the night in thrall. Indeed, even when harassed by cares, he will rehearse some secret strain, tuning his voice to a stealthy hum and, left to himself, he will ever burst into song which can charm no ears but his own. Such are the ordinances of the Lyre, which at the rising of Libra’s twenty-sixth degree will direct its prongs to the stars". [Manilius, book 5, Astronomica, 1st century AD, p.327].